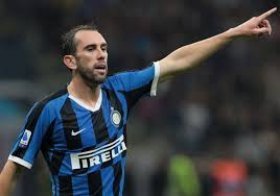 Uruguayan defender will choose between Manchester United and Tottenham Hotspur

Inter Milan Diego Godin could reportedly consider a move to either Manchester United or Tottenham Hotspur, having failed to nail down a regular starting role under Antonio Conte this term.

Manchester United could reportedly seek to land the signature of Diego Godin from Inter Milan when the transfer window reopens in the summer.

Atletico Madrid goalkeeper Jan Oblak is reportedly keen on ending his association with the Spanish side and would favour a potential move to Manchester United.

Manchester United have seen a big depression when it comes to their defence. They have gone from the legends Vidic and Ferdinand to failure Eric Bailey and Phil Jones. It's been a long time since United signed a quality centre back. Come next summer the current situation may change. Ole Gunnar Solskjaer is closing in on a permanent appointment and has started to look on transfers for next season.

Manchester United have reportedly expressed their intention to secure the signature of Kostas Manolas from AS Roma during the current transfer window.

Manchester United manager Jose Mourinho is reportedly eager to sort out the club's leaky defence with the signing of Napoli's Kalidou Koulibaly in the New Year.

Manchester United are reportedly weighing an approach to sign Brighton & Hove Albion centre-back Lewis Dunk at the turn of the year.

Manchester United could reportedly make a fresh attempt to pursue Diego Godin from Atletico Madrid when the transfer reopens in January.

Italy international Leonardo Bonucci is said to have snubbed the prospect of joining Manchester United from AC Milan during the recent transfer window.

Manchester United are reportedly still furious with Diego Godin after he used their interest as a leverage to sign a new long-term deal with Atletico Madrid.

Leicester City goalkeeper Kasper Schmeichel has said that his target in the Premier League this season is to have at least 40 points.

Atletico Madrid defender Diego Godin is unlikely to make the move to Manchester United despite being offered to the Old Trafford outfit earlier in the week.

Serie A holders Juventus are reportedly said to hold an interest in acquiring the services of Shkodran Mustafi from Arsenal during the ongoing transfer window.

Uruguay striker, Luis Suarez has backed his team's defence to halt France and their in-form attacker Kylian Mbappe when the two sides meet in the quarter-final of the Russia 2018 World Cup.

Ex-Manchester United defender Gary Neville has hailed José Giménez and Diego Godin after their performance prevented Cristiano Ronaldo from scoring in Uruguay's win over Portugal in the ongoing FIFA World Cup in Russia.

Manchester United have reportedly reverted their plans to sell Luke Shaw and are now prepared to reward him with a new long-term contract.