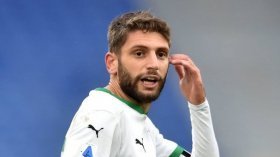 Leicester City's mouth-watering attack if Brendan Rodgers completes stunning transfer
Leicester City could have one of the most impressive front-four line-ups in the Premier League if they sign Domenico Berardi in January.
11/09 13:16

Chelsea have been credited with an interest in signing Sassuolo winger Domenico Berardi this summer.

Roma to go all out for Berardi

Roma are looking to use the money acquired from the sale of Mohammed Salah to find a suitable replacement on the right wing, and they have chosen Domenico Berardi as their prime candidate.

Inter join the chase for Berardi

Internazionale have joined the race to sign Sassuolo forward Domenico Berardi, according to reports in Italy.

Juventus are hopeful of securing a summer deal for Everton striker Romelu Lukaku. The Belgian international has already expressed his desire to move on to a bigger club.

Domenico Berardi has been attracting interest from several clubs around Europe with his performances this season. Sassuolo director Giovanni Carnevali admits that the club will listen to offers for the talented forward this summer.

Werder Bremen are eyeing a moves for Juventus duo Luca Marrone and Domenico Berardi. The youngsters are co-owned by The Bianconeri and Sassuolo and have turned in great performances for their club.