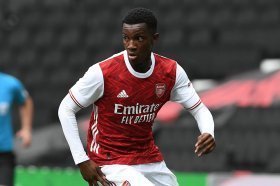 Arsenal's dream Carabao Cup quarter-final opponents revealed as Chelsea and Liverpool await
Eddie Nketiah were enough for the Gunners to overcome Leeds United at the Emirates Stadium and become the first team to reach the quarter-
27/10 22:00

Arsenal manager Mikel Arteta has expressed his desire to keep Eddie Nketiah at the club beyond the current campaign.

Sardar Azmoun's agent has dismissed the possibility of the striker joining Arsenal during the January transfer window.

Inter Milan have been credited with an interest in signing Arsenal striker Alexandre Lacazette in January.

Arsenal manager Mikel Arteta has ruled out any potential injuries for Thomas Partey and Kieran Tierney after they were substituted against Burnley.

Arsenal set to lose striker on a free transfer

Arsenal could lose Eddie Nketiah for free after failing to offload him during the summer transfer window, The Sun reports.

Arsenal are likely to keep Eddie Nketiah after Crystal Palace failed to negotiate a suitable fee for his services.

Arsenal midfielder on the radar of Everton

Everton are reportedly interested in landing the signature of Arsenal midfielder Ainsley Maitland-Niles.

Arsenal midfielder makes the switch to Serie A

Arsenal midfielder Lucas Torreira has made the move to Fiorentina on loan with the option to buy next summer.

Arsenal midfielder Lucas Torreira is set to return to the Italian top flight with Fiorentina.

Arsenal have reportedly set their asking price for Eddie Nketiah after failing to negotiate a new contract.

Arsenal plan to recruit a new striker before the transfer window closes this month.

Arsenal are preparing to offload multiple players before the closure of the summer transfer window, ESPN reports.

Arsenal could be without eight players for Chelsea clash

Arsenal could be without eight first-team players when they entertain Chelsea in the Premier League on Sunday.

Arsenal have no plans of offloading either Pierre-Emerick Aubameyang or Alexandre Lacazette this month.