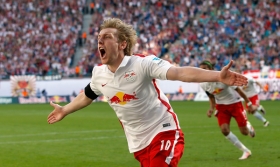 It is been four matches since Real Madrid has scored and they desperately need goals to overturn their fate in domestic as well as European competitions.

Sweden international Emil Forsberg has confirmed that he could pursue a fresh challenge away from RB Leipzig during this summer's transfer window.

Arsenal are reportedly said to be preparing a &pound50m bid to pursue Emil Forsberg from RB Leipzig this summer. The Sweden international has come off a tough season with the Bundesliga outfit but he still remains a priority target for the north London giants.

Arsenal have reportedly joined the race to sign RB Leipzig midfielder Emil Forsberg. The Swede is widely expected to leave the Bundesliga this summer after the Leipzig finished a disappointing sixth in the standings.

German outfit RB Leipzig are reportedly looking into a move for Chelsea attacker Kenedy. The Brazilian has struggled to make an impact during his time in west London but impressed in his temporary stint at Newcastle United in the second half of last season.

Arsenal will come back for RB Leipzig midfielder - Raphael Honigstein

German football journalist Raphael Honigstein has suggested that Arsenal are likely to retain their interest in RB Leipzig midfielder Emil Forsberg when the season comes to a close.

In yet another turn of events, Inter Milan boss Luciano Spalletti will go out of his way to block a possible departure for Ivan Perisic as there is not enough time left to find a viable replacement.

With Manchester United's frustration at a lack of progress with a proposed move for Inter Milan star Ivan Perisic grows, they could now turn to RB Leipzig's Emil Forsberg instead, in a deal that would cost around £45 million.

Arsenal are reportedly in a direct fight with Bayern Munich in the quest to lure midfielder Emil Forsberg from RB Leipzig.

Arsenal are reportedly plotting a &pound20m move for RB Leipzig's Emil Forsberg ahead of this summer's transfer window.