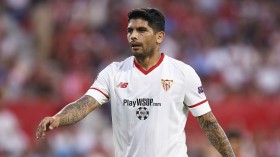 Ever Banega admits wrench to be leaving Sevilla

Arsenal are likely to retain their interest in signing Ever Banega from Sevilla in the summer as they seek to overcome the departure of Aaron Ramsey.

Arsenal could be close to sealing the signature of Sevilla midfielder Ever Banega after his agent was spotted in London ahead of the winter transfer window.

Arsenal midfielder Aaron Ramsey is deemed to have held discussions with Paris Saint-Germain ahead of a potential move to Parc des Princes at the turn of the year.

Arsenal boss Unai Emery is reportedly keen on acquiring the signature of Sevilla midfielder Ever Banega when the transfer window reopens next month.

Arsenal manager Unai Emery has urged the club to acquire the signature of Ever Banega from Sevilla, should they part ways with Aaron Ramsey midway through the season.

Arsenal are interested in signing Sevilla midfielder Ever Banega and have made him their number one priority, the Sun reports.

BBC Sport reporter David Ornstein has claimed that Arsenal are yet to secure an agreement to sign midfielder Lucas Torreira from Sampdoria this summer.

Arsenal are reportedly deemed favourites to pursue the services of Argentine midfielder Ever Banega this summer.

Arsenal to hold talks with Ever Banega's agent?

Arsenal have reportedly planned a meeting with Ever Banega's agent this week as they seek to lure the Argentine midfielder to the Emirates this summer.

Manchester United play host to Chelsea in this weekend's Premier League showdown at Old Trafford. The Red Devils have lost two of their previous three top-flight outings, and they face a must-win game on Sunday in order to maintain their second position in the standings.

Colombia international Luis Muriel will join Sevilla in the coming days after the Spanish club agreed on a club-record £17.7m fee with Sampdoria.

Croatia international Ivan Perisic is reportedly keen to push through a move to Manchester United despite Inter Milan's reluctance to lower his transfer value.

Ever Banega officially makes his return to Sevilla

Sevilla confirmed the signing of Ever Banega, which signals a return for the Argentinian just one year after leaving for Inter Milan.

Everton to move for Ever Banega?

Inter Milan midfielder Ever Banega has emerged as a potential target for Everton ahead of the winter transfer window. The Nerazzurri are under pressure to sell some key players in order to comply with the Financial Fair Play ruling.

AC Milan could look to sign French midfielder Geoffrey Kondogbia from rivals Inter Milan, with Liverpool also interested, according to reports in Italy.

Inter Milan will not sanction a swap deal which would see Croatian midfielder Marcelo Brozovic move to Chelsea, with Cesc Fabregas joining the Nerazzurri, according to report in Italy.

Chile international Gary Medel is considering his future at Inter Milan with manager Roberto Mancini keen on reshuffling the squad over the summer.

Manchester United will reportedly battle it out with Inter Milan for the services of Sevilla midfielder Ever Banega. The 27-year-old's current deal is due to expire at the end of the season.

Juventus have become the latest side to show interest in Manchester United target Ever Banega.

Everton are reportedly pondering over a January bid for Sevilla midfielder Ever Banega,