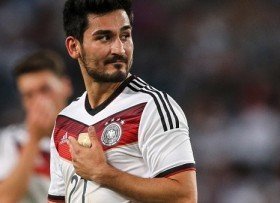 A number of Manchester United players are said to have grown frustrated with manager Jose Mourinho's persistence with Nemanja Matic in the starting lineup.

Manchester City manager Pep Guardiola has hinted that Kevin de Bruyne could play a part in this weekend's Premier League showdown against Liverpool.

Manchester City have suffered a major injury blow ahead of the Liverpool game with midfielder Ilkay Gundogan likely to miss the Premier League clash.

Manchester City midfielder Ilkay Gundogan is willing to reject interest from Barcelona in order to sign a new contract with the club in January, The Sun reports.

Manchester City have confirmed that Kevin De Bruyne could be sidelined for upto three months after picking up a knee ligament injury in training.

Manchester City are ready to start contract talks with midfielder Ilkay Gundogan after the World Cup, The Sun reports.

Germany and Manchester City midfielder Ilkay Gundogan is still proud to have played for his country, despite jeers being received by the player. In a recent friendly game, Gundogan had been booed throughout the game after high profile meetings between the player and the Turkish president Erdogan.

Ivory Coast international Yaya Toure is reportedly keen on remaining in the Premier League once his contract with Manchester City expires in the summer.

Manchester City will be aiming to make strides towards the quarter-finals of the Champions League when they take on Basel at St Jakob Park in the round of 16 first-leg. The Swiss champions have possessed an impressive record against English sides with four wins in their previous five home outings, but they can expect a stiffer challenge versus the Premier League leaders.

Manchester City to compete with European giants for Liverpool midfielder

Manchester City have reportedly emerged as surprise candidates to sign Liverpool midfielder Emre Can at the end of the season.

Premier League leaders Manchester City will reportedly be without two key defenders ahead of Saturday's crunch encounter against Chelsea.