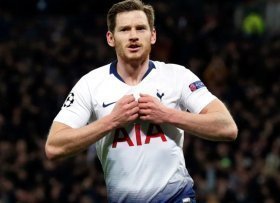 Barcelona to move for Tottenham Hotspur's Jan Vertonghen?
transfer in search of pastures new. Vertonghen recently revealed that he was weighing up "the pros and cons" of staying at the...
29/03 19:07

Tottenham Hotspur could reportedly make an attempt to sign Chris Smalling from Manchester United when the transfer window reopens in five months' time.

Tottenham defender on the radar of AC Milan

Tottenham are reportedly eyeing a summer move for Norwich City centre-back Ben Godfrey, according to The Sun.

Tottenham Hotspur boss Jose Mourinho is understood to have monitored the performance of Dayot Upamecano during Leipzig's recent league clash against Bayern Munich.

Tottenham are reportedly preparing a summer move for Bournemouth defender Nathan Ake as the Cherries face the possibility of relegation.

Tottenham amongst the clubs to show interest in Championship defender

According to Daily Mail, Tottenham have shown interest in signing Brighton defender Ben White alongside Liverpool and Chelsea.

According to Sky Sports, Serie A club Napoli are interested in Tottenham defender Jan Vertonghen.

Tottenham Hotspur manager Jose Mourinho is reportedly looking into a summer deal for Napoli defender Kalidou Koulibaly, who is also on the radar of Chelsea.

Tottenham Hotspur manager Jose Mourinho is reportedly keen on pursuing a mid-season deal for Nathan Ake, who was previously in the ranks of London rivals Chelsea.

Tottenham Hotspur are reportedly prepared to battle with Arsenal in the race to sign RB Leipzig defender Dayot Upamecano.

Can Tottenham go as far as winning the Premier League?

The word ‘dark horse’ has been synonymous with Tottenham Hotspur. Traditionally, Tottenham aren’t considered a ‘heavyweight’, but they can be seen fighting tooth and nail against the heavyweights. In recent times, the likes of Manchester United and Arsenal have been finding it hard to keep the Spurs in check. Tottenham handed Arsenal a 2-0 bashing during the Quarter-final of the Football League Cup (December 2018). Dele Alli and Son Heung-min were seen finding the net.

Tottenham Hotspur centre-back Jan Vertonghen was reportedly left angry after Mauricio Pochettino's decision to omit him from the matchday squad for the Premier League opener against Aston Villa.

Juventus are preparing a transfer swoop for Belgium international defender Toby Alderweireld in the summer transfer window. According to reports, the Tottenham defender is available for a fee of around £25 million.

Tottenham Hotspur have been linked with a long list of defenders over the past few months and it would be no surprise if some of the claims have truth behind them.

Tottenham Hotspur duo Jan Vertonghen and Mousa Dembele are deemed as potential doubts for the Champions League game against Barcelona in midweek.

Liverpool manager Jurgen Klopp has said that he is unsure regarding Roberto Firmino's participation in the Champions League opener after sustaining an eye injury during the recent league triumph over Tottenham Hotspur.

Belgium international Jan Vertonghen is expecting Tottenham Hotspur to extend his current contract until the summer of 2020.