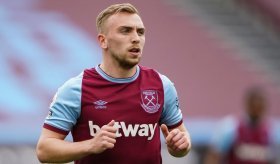 Liverpool are keeping tabs on the performances of Jarrod Bowen ahead of a possible summer approach.

West Ham United are ready to open contract negotiations with Jarrod Bowen amid the reported interest from Liverpool.

Liverpool to swoop for West Ham United star in January?

Liverpool and Tottenham Hotspur are reportedly keeping a close watch on the performances of West Ham United forward Jarrod Bowen.

The Championship is a hotbed of talent, but every so often, a player makes his mark on the second tier in emphatic style, prompting calls for Premier League sides to come in and bring them to the big time. Here are five that could make it in the top flight.

Leicester City reportedly hold the advantage over Newcastle United and Southampton in the race to sign Jarrod Bowen from Championship side Hull City.

Tottenham Hotspur are reportedly keeping a close watch on the proceedings of Jarrod Bowen and could make an approach for his signature during the current month.