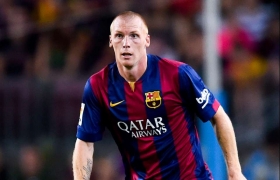 Barcelona set to beat Chelsea in race for Leonardo Bonucci

After trying to tempt Bonucci to Chelsea for months, Antonio Conte looks set to lose out after Barcelona emerged as the new favourites to land the defender.

French defender Jeremy Mathieu has been told to find a fresh club this summer as he does not feature in the plans of Barcelona boss Ernesto Valverde.

New Barcelona manager Ernesto Valverde wants to implement changes to the Catalan club quickly and has already decided which players he wants to sell in the summer.

Javier Mascherano has no thoughts of joining the Chinese Super League despite dropping down the pecking order at Barcelona.

Arsenal closing in on Mustafi

Arsenal are on the verge of sealing a £28 million deal to sign Shkodran Mustafi from Valencia, according to reports.

Arsenal have began negotiations with Barcelona to bring French defender Jeremy Mathieu to the Emirates this summer. The Gunners are in dire need of a new centre-half after Gabriel joined Per Mertesacker in the injury table.

Barcelona defender Jeremy Mathieu is keen on making a move to Ligue 1 with As Monaco this summer.

Premier League giants Arsenal and Manchester United are reportedly set to battle it out for the services of Barcelona defender Jordi Alba, according to The Express.

Spanish giants Barcelona have been barred from signing any new players until January 2016, once the current transfer season ends, after FIFA rejected the club’s plea against the transfer ban.

Barcelona have agreed a 20 million euro fee to sign Jeremy Mathieu from Valencia and the 30-year old has signed a four-year contract at the Camp Nou, with the option of a further year.

Barcelona have joined the race to sign one of best defenders from the Eredivisie, Mundo Deportivo reports.

Manchester City are apparently plotting an offer for Valencia wing-back Jeremy Mathieu after a series of good performances for his team.

Valencia will host Turkish champions Bursaspor this week, knowing a win could ensure they place in the next round of the Champions League. The Spaniards currently sit second in Group C, two points ahead of a Rangers side who play leaders Manchester United at Ibrox, in the groups other match.

Toulouse defender Jeremy Mathieu has again revealed he is desperate to finally make a move to Serie A side AS Roma this summer. The French left back has been persistently linked with the on-off move to the Italian side.

Bordeaux not giving up yet

Mathieu move to Roma back on

Toulouse defender Jeremy Mathieu could still be on the move to AS Roma after a move away from France seemingly is back on the cards. An injury last season cost Mathieu the opportunity of a move last year.