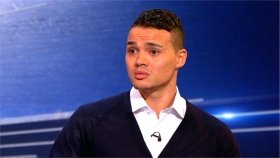 'I think it is wrong' - Jermaine Jenas defends Steve Bruce but admits Newcastle are 'tough to watch'
two points from 17 matches was an unprecedentedly poor start to a Premier League season but they came out well on top against a Newcastle
16/01 13:00

Former Premier League star Jermaine Jenas has said that Manchester United should have sold Anthony Martial during the summer rather than parting ways with Romelu Lukaku.

Jermaine Jenas: Spurs could struggle in the Premier League next season

Jermaine Jenas has swapped Tottenham for a move to Queens Park Rangers. The midfielder is hopeful that a move across London can revive his career.

Aston Villa will be hoping to avoid a 3rd consecutive league defeat, whilst under fire Steve Bruce looks for 3 points to push his side back into the top half of the Premier League table.

An important Midlands derby brings excitement to the Premier League schedule this weekend, with Aston Villa taking on rivals West Brom at Villa Park. A win for the Villains could push them into a top six place.

Aston Villa midfielder Jermaine Jenas hopes that his recent move from Tottenham will help him earn a recall to the England squad. Jenas, 28, believes his lack of first team action cost him his England place.

Aston Villa are considering a last minute offer for Tottenham midfielder Jermaine Jenas. The player has been told he can leave White Hart Lane.

Fulham boss Martin Jol has admitted that he will busy this summer in the transfer market. Fulham have been linked with Carlton Cole, Jermaine Jenas and David Bentley.

Tottenham misfit Jermaine Jenas will quit the club this summer, according to several reports. Jenas has been linked with a shock move to Fenerbahce.

Jermaine Jenas could be heading for the White Hart Lane exit door this summer. It is understood that Newcastle will attempt to bring Jenas back to St James Park in a 6 million deal.

Tottenham midfielder Jermaine Jenas has told The Sun that he would like to stay at the club for the time being, insisting that the interest from Aston VIlla is not his priority at this time.

It is thought that Tottenham boss Harry Redknapp is eyeing a swoop for Aston Villa and England star Ashley Young.

Portuguese star Ricardo Quaresma is reportedly on the verge of completing a shock move to Tottenham. It is understood that a deal could see Jermaine Jenas head to Inter Milan.

Spurs are on talks with Keane

Liverpool has allowed Robbie Keane to talk to Tottenham Spurs on his potential move back to the London club.

Inter Milan is all set to swoop of Tottenham's Jermaine Jenas in a swap deal that will see talented Portugese winger Ricardo Quaresma joining Spurs.

Inter Milan boss Jose Mourinho has moved to quickly deny that he is interested in making a move for Tottenham midfielder Jermaine Jenas. The player is reportedly ready to quit Spurs for the continent.

Tottenham stunned Arsenal with one of the all time Premiership comebacks, as Spurs grabbed two incredibly late goals to draw 4-4 at the Emirates Stadium on a miserable Wednesday night for Arsenal.