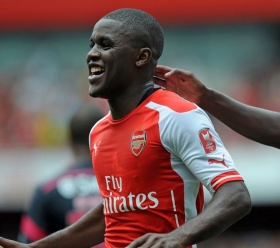 Arsenal fans react to Joel Campbell’s latest tweet
Arsene Wenger built up a reputation for developing players into greats at Arsenal, but there were a number of players who didn’t quite
01/04 15:00

Serie A newcomers Frosinone are reportedly on the cusp of landing the signature of Joel Campbell from Arsenal this month.

French side Marseille are reportedly looking into a deal for Arsenal midfielder Mohamed Elneny before their transfer window closes this month.

Arsenal goalkeeper David Ospina has supposedly turned down a move to Besiktas this summer after reaching a stumbling block in terms of the wages involved.

Arsenal manager Unai Emery has ruled out the possibility of Danny Welbeck leaving the club after the English transfer window closed on Thursday.

Arsenal are reportedly seeking to beat Manchester United in the race to sign Jerome Boateng from Bayern Munich this month.

Arsenal forward on the cusp of summer exit?

Arsenal winger Lucas Perez is reportedly heading for a summer exit with the Gunners said to have finalised a transfer package with Sporting Lisbon.

Arsenal forward Lucas Perez is reportedly close to making the switch to Fiorentina before this month's transfer deadline.

Arsenal manager Unai Emery has dropped five players from the Gunners' 25-man squad which has travelled to Singapore for the International Champions Cup.

Arsenal have announced the capture of Matteo Guendouzi from Lorient for a reported fee of around £7m. The Frenchman becomes the club's fifth senior recruit of the summer transfer window and is expected to feature in the first-team next season.

Serie A side Lazio have expressed an interest in signing Arsenal outcast Joel Campbell this summer. The 26-year-old has been with the Gunners for the past seven seasons, although he has managed just 40 appearances across all competitions.

Spanish forward will stay put with Arsenal next season - Agent

The representative of Lucas Perez has confirmed that his client is keen on succeeding with Arsenal and will rejoin his teammates for pre-season training.

Arsenal have confirmed the arrival of Bernd Leno from Bayer Leverkusen for a reported fee of around £22m.

Arsenal look set to sell striker Joel Campbell to Villarreal this summer, in a deal worth a reported 5.5 million euros. The Costa Rica international, who appeared in today's World Cup game against Serbia, spent last season on loan at Real Betis.

Costa Rican winger Joel Campbell has reportedly informed Arsenal that he is not keen on another loan move away from the Emirates. The 25-year-old joined the Gunners from Saprissa in the summer of 2011 and has since managed just 23 top-flight appearances for the north London club.

Turkish champions Besiktas are plotting to seal a cut-price deal for unsettled Arsenal winger Joel Campbell. The Costa Rica international is a likely candidate to leave the Emirates with his deal due to expire in June 2018.

Brighton & Hove Albion are reportedly eyeing a cut-price deal for Arsenal's Joel Campbell ahead of their return to the top-flight next season.

Walcott always in my plans - Wenger

Arsenal boss Arsene Wenger has insisted that Theo Walcott was never in danger of leaving Arsenal in the summer. The England international had a reduced role at the Emirates last season.

Arsenal forward Joel Campbell has agreed to join Sporting Clube de Portugal on a season-long loan. The Costa Rican is currently undergoing a medical with the Lisbon outfit.

Arsenal boss Arsene Wenger is convinced that Riyad Mahrez would be the right signing for the club in this summer's transfer window. Leicester City value their player at £45m.