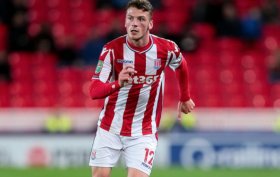 An epitome of Stoke City's strange transfer business - Erik Pieters stars on right wing in Premier League
Pieters replaced at Burnley, and Josh Tymon, who hasn't been involved since January, his competition. For your latest Stoke ...
10/07 07:26

When Josh Tymon rejected Hull City in favour of a five-year contract at Stoke City, Hull's club management were up in arms. Understandably so, as they may have lost one of the brightest young English defensive talents in a decade.

Stoke City midfielder Giannelli Imbula has reportedly finalised terms with AS Monaco ahead of a proposed switch to the Stade Louis II this summer.

Stoke City are reportedly weighing up an offer to sign Juventus midfielder Mario Lemina this summer.

Holland international Bruno Martins Indi will undergo a series of medical tests with Stoke City ahead of his permanent switch from Porto this summer.