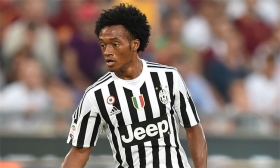 Paul Pogba should 'stay home' in Turin, jokes former Juventus team-mate Juan Cuadrado, as he urges his old pal to snub Manchester United extension and return to Italy
is preparing to sign a fresh deal worth £400,000-a-week at Old Trafford. L'Equipe claim that the additions of Cristiano Ronaldo, Raphael
07/10 15:47

Senegal coach Aliou Cisse has said the he sees no reason why his Senegal team cannot qualify from group H.

Juventus are reportedly keen on signing Chelsea striker Alvaro Morata on a two-year loan deal with the option of a permanent move thereafter.

Arsenal are reported to have ended their pursuit of Juventus' versatile attacker Juan Cuadrado. The Colombia international was deemed as a potential target for the Gunners in the summer, although a deal never materialised.

Arsenal have reportedly switched their attention to Juventus attacker Juan Cuadrado after admitting defeat in the pursuit of Monaco's Thomas Lemar.

AS Roma will reportedly seek to finalise a deal for former Chelsea winger Juan Cuadrado after they failed in their attempts to sign Riyad Mahrez from Leicester City.

Juventus are prepared to sell Colombian winger Juan Cuadrado this summer, should any club match their asking price of £26.8m. The 29-year-old has emerged as a transfer target for Arsenal, who are preparing for the exits of Carl Jenkinson and Mathieu Debuchy this summer.

Juventus have completed a deal to sign 23-year-old Italian intenrational forward Federico Bernandesci for around &pound35 million including add-ons. The player arrives at the Old Lady from Serie A rivals Fiorentina.

After much speculation, Douglas Costa has finally signed for Italian club Juventus and will complete his medical this week before being officially unveiled.

Following news about Dani Alves possibly moving to Manchester City, the Brazilian has added fuel to the speculation by openly talking about his admiration for Pep Guardiola.

Arsenal are reported to have failed to an approach to sign Juventus winger Juan Cuadrado this summer.

Antonio Conte has reportedly launched a bid of €60 million to bring Juventus left-back Alex Sandro to Stamford Bridge next season.

Marco Verratti has informed PSG that he wants to leave the club in the summer, with Italian champions Juventus being the likely destination.

Real Madrid overcame Juventus in front of a packed Cardiff crowd to become holders of the UEFA Champions League for a record 12th time. Cristiano Ronaldo once again proved his doubters wrong to lead the Spanish giants to yet another piece of silverware.

Italian champions Juventus will approach PSG for a potential deal for Argentinian winger Di Maria after the Champions League final.

Juventus will reportedly buy-out Juan Cuadrado's contract after they managed to lift the Serie A title for the sixth year in a row.

Barcelona are one among the favourites to sign Juventus full-back Stephan Lichtsteiner in the winter transfer window. The Swiss international has fallen down the pecking order at Juventus since Dani Alves' arrival from Camp Nou in the summer.

Italian champions Juventus are preparing to offer a pre-contract to Manchester City full-back Pablo Zabaleta amid the uncertain future of Stephan Lichtsteiner.