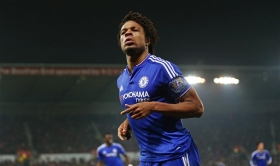 Spanish side Las Palmas have secured the signing of former Chelsea striker Loic Remy on a two-year deal, a statement on the club's official website revealed.

French forward Loic Remy could be set for a surprise return to his former club Newcastle United. The Chelsea striker spent last season on loan with Crystal Palace.

Newcastle United manager Rafa Benitez has told reporters that he still hopes to bring in new arrivals before the transfer window closes. Newcastle finally opened their Premier League account with a 3-0 win over West Ham on Saturday.

Premier League holders Chelsea are prepared to end their association with striker Loic Remy once they recruit a new marksman to their ranks.

Remy has endured a torrid team since moving to Chelsea and looks set for a move back to the Ligue 1 after just four years away.

Premier League holders Chelsea are looking to end their association with Loic Remy, who has failed to make any noticeable impact in the Blues shirt.

Loic Remy is on the verge of completing his proposed loan move to Crystal Palace. The Frenchman has seen his playing time nullified this season after the arrival of Michy Batshuayi.

West Ham United are closing in on the £24 million signing of Juventus striker Simone Zaza, according to reports.

West Ham United are considering a loan approach for Chelsea's Loic Remy after they failed in their attempts to sign a new striker this summer. Slaven Bilic's side are in a desperation stage after Andy Carroll joined Andre Ayew, and Diafra Sakho in the physio room.

Crystal Palace manager Alan Pardew has been in contact with representatives of Chelsea striker Loic Remy and is hoping to wrap up a loan deal for the Frenchman before the end of the August transfer window. Remy is currently fourth choice forward at Stamford Bridge.

Chelsea are prepared to offer the likes of Asmir Begovic and Loic Remy as part of an agreement to sign Everton star Romelu Lukaku. The 23-year-old is desperate to join a top European club this summer.

Chelsea have placed Loic Remy as makeweight in a deal which could see Everton striker Romelu Lukaku return to Stamford Bridge this summer. The Belgian has revealed his intention to win trophies at a top European club next season.

Chelsea to move for Michy Batshuayi

Chelsea will challenge the likes of Tottenham Hotspur and West Ham United for the services of Marseille striker Michy Batshuayi this summer. The Belgian is almost certain to leave Les Phoceens due to their ongoing financial crisis.

Belgian international Romelu Lukaku will earn his dream return to Chelsea once Everton confirm the appointment of a new head coach. The 23-year-old has already stated his desire to join a bigger club capable of winning trophies.

France international Loic Remy is almost certain to leave Chelsea following his lack of playing time this season. The 29-year-old had been strongly linked with moves to Crystal Palace and Swansea City last winter but he opted to stay put at the Premier League holders.

Chinese Super League side Shanghai Shenhua are eager to land the services of Chelsea striker Loic Remy this month.

Chelsea are reported to have accepted an £11.5m bid from Leicester City for striker Loic Remy.

Newcastle United have made an offer for French striker Loic Remy. The 29-year-old has been told he is free to leave Chelsea.