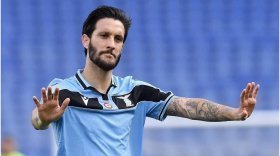 Everton are looking into a winter move for Luis Alberto as they look to add more creativity in their ranks.

Chelsea to battle with Inter for highly-rated Serie A midfielder?

Chelsea are reportedly set to battle Inter Milan for the signing of Lazio midfielder Sergej Milinkovic-Savic.

Newcastle scouts have been monitoring the progress of young French starlet Sega Coulibaly. The defender has also been linked with a move to Liverpool, but Newcastle are believed to be in pole position to secure a deal.

Malaga to sign Luis Alberto on loan from Liverpool

Spanish attacking midfielder Luis Alberto will complete a summer loan deal to join Malaga. The player has so far failed to force his way into Liverpool's first team.

Liverpool boss Brendan Rodgers is reportedly set to have a major squad reshuffle this summer.

Liverpool scouts are tracking Barcelona youngster David Babunski. The Macedonia international is currently playing for the Catalan side's 'B' team and has been with the Spanish side since 2006.

Barcelona winger Cristian Tello has told reporters that he had the opportunity to join Liverpool this summer, but instead decided to stay put at his current club. The youngster has been persistently linked with a move away from the Nou Camp.

Liverpool in talks for Ilori and Sakho

Premier League side Liverpool have confirmed they're in talks to sign center back Mamadou Sakho from Paris St Germaine, and Tiago Ilori from Sporting Lisbon.

Liverpool have been linked with a move for Sporting Lisbon midfielder Diego Capel. The Spaniard is available for around £6 million according to reports from Portugal, with the player apparently ready to leave his current club this summer.

Liverpool look all set to win the race for Atletico Madrid’s Diego Costa, who has also been tracked by Arsenal. It has been suggested by a report in Sports Direct News that the deal could be sealed by Monday.

Liverpool have made a second formal enquiry for Newcastle United Midfielder Hatem Ben Arfa, according to the L'equipe. The Reds manager Brendan Rodgers has alot of admiration over the talented  26-year-old and is now willing to entice the Magpies in letting their French star make a switch away from St.James Park.

Busy Liverpool manager Brendan Rodgers has told the club's official website that he is hopeful more new players will be arriving at Anfield before the end of the month. So far, Kolo Toure, Luis Alberto, Iago Aspas and Simon Mignolet have joined the Reds.

Liverpool have finally wrapped up the deal with former Manchester City centre-back, Kolo Toure, who will move to the Anfield on a free transfer. Toure, 32, becomes Brendon Rodger’s fourth signing this summer as we see his Manchester City contract expire.

Liverpool have been tracking Gerard Deulofeu, the winger who is currently playing for Barcelona's B team. Having signed Luis Alberto from Sevilla, who spent last year on loan at Barcelona B as well - the club have a lot of knowledge about Deulofeu's abilities.

According to reports from Italy, out of contract midfielder Mathieu Flamini will have discussions with AC Milan and three Premier League teams. It is understood that Liverpool and Arsenal could be amongst the teams all chasing the Frenchman's coveted signature.

Liverpool manager Brendan Rodgers refused to be drawn on reports that Real Madrid have made an offer for Uruguayan forward Luis Suarez. The striker, who is currently away on international duty at the Confederations Cup, is reportedly miserable with his current situation at Anfield and is actively seeking a move away.

Liverpool have completed a deal for Sevilla forward Luis Alberto. The Anfield side have paid a £6.8m fee for the transfer. Alberto, aged 20, will now link up with fellow countryman Iago Aspas, who also joined the Reds this summer.

Liverpool are  set to land the Spanish Under 21 International forward after Sevilla accepted a transfer bid from the Anfield side.