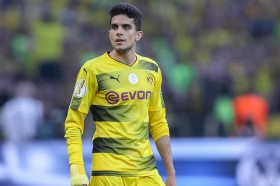 Arsenal defender Sokratis Papastathopoulos is prepared to snub advances from Genoa in order to join Real Betis this month.

Manchester City and Manchester United have reportedly been put on red alert with Borussia Dortmund mulling over the sale of Marc Bartra before the end of the month.

The Champions League quarter final tie between Borussia Dortmund and Monaco was postponed this evening after the Dortmund team bus was hit by an explosion.

Arda Turan Must Leave Barcelona To Save His Career

Barcelona announced the signing of Arda Turan from Atletico Madrid on July 6, 2015. The Turkish international had become a fan favorite at the Vicente Calderon during the four seasons he spent with the Madrid club.

Götze return to Dortmund for €26m

Mario Götze is set to complete a return to Borussia Dortmund, after BVB have agreed a €26 million deal with Bayern Munich.

Reported Tottenham Hotspur and Liverpool target Marc Bartra has completed his move to Borussia Dortmund on a long-term contract. The Spain international has accepted the deal following his lack of playing time at Barcelona last season.

Barcelona will reportedly listen to offers for Manchester United and Tottenham Hotspur target Marc Bartra. The 25-year-old has had a frustrating season at Camp Nou with first-team chances hard to come by.