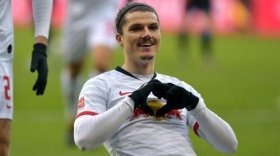 Marcel Sabitzer hints he could join Julian Nagelsmann at Tottenham if Jose Mourinho axed
's stock has risen tremendously this term and a move to the Premier League is touted. Sabitzer has been an important cog in Leipzig's
03/03 11:05

Tottenham Hotspur have been handed a boost in signing Marcel Sabitzer from RB Leipzig during the summer transfer window.

RB Leipzig have no plans to sell Dayot Upamecano in the current transfer window amid the reported interest from Chelsea and Manchester United.

Arsenal and Tottenham locked in transfer battle for Marcel Sabitzer

Arsenal and Tottenham will do battle this month to sign Austrian international midfielder Marcel Sabitzer. The 26-year-old, who currently plays for German side RB Leipzig, is considered one of the Bundesliga's best midfield talents and both Spurs and the Gunners are ready to match Leipzig's 55 million euro transfer valuation.

Arsenal could reportedly go head-to-head with Tottenham Hotspur in the race to sign Marcel Sabitzer from RB Leipzig.

Arsenal could battle it out with Tottenham Hotspur to sign RB Leipzig attacker Marcel Sabitzer at the end of the campaign.

Aston Villa and Hull City to bid for Marcel Sabitzer

Aston Villa and Hull City are to make a transfer bid for Austrian international striker Marcel Sabitzer in January. Rumours suggest that both Premier League teams have been in contact with Sabitzer's club RB Leipzig.