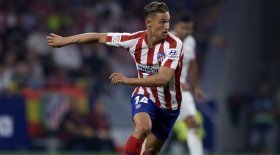 Manchester United are reportedly prepared to spend a sizeable fee as they seek to land the signature of Marcos Llorente from Atletico Madrid.

Manchester United are reportedly keen on landing the signature of Atletico Madrid midfielder Marcos Llorente on a temporary basis for the season.

Arsenal have reportedly received a significant boost in signing Steven N'Zonzi from Sevilla. The 29-year-old is currently at the summer World Cup with France but he has recently indicated his desire to leave the Andalusian outfit.

Liverpool boss Jurgen Klopp is deemed to have expressed an interest in succeeding Zinedine Zidane as the next Real Madrid manager.

Arsenal are reportedly in the hunt to sign Spanish midfielder Marcos Llorente from Real Madrid. The 22-year-old is also a transfer target for La Liga duo Sevilla and Atletico Madrid.

The Italian giants are not finished with their summer spending spree and now want Real Madrid midfielder Casemiro in a bid to bring the club back to its glory days.

Arsenal boss Arsene Wenger is eager to pursue the services of Real Madrid midfielder Marcos Llorente. The 21-year-old is currently playing his trade for Alaves on a season-long loan from Real Madrid.

Arsenal are keen on sealing a summer move for Real Madrid youngster Marcos Llorente. The Spaniard is currently featuring for Alaves on a season-long loan from the European champions.