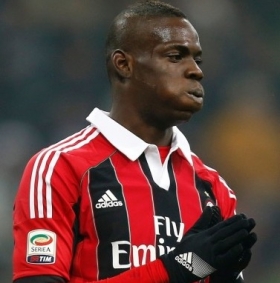 Mario Balotelli's infamous trick shot that saw him subbed off for Man City in 2011
in his bathroom, but he did at least manage to endear himself to Premier League fans. Whether or not he managed to endear himself so much
20/06 07:30

Arsenal have been linked with a surprise move for Mario Balotelli, who is expected to leave Nice at the expiry of his contract next month.

Italian forward Mario Balotelli has opened up on his long-term plans for the future, suggesting he will be headed back to his home country. Balotelli has been a revelation since moving to Nice two seasons ago.

West Ham and Newcastle United are both in the race to sign Nice striker Alassane Plea. The forward has returned 19 goals in 45 games so far this campaign and has even been preferred to striker Balotelli in recent weeks.

AS Roma have reportedly emerged as front-runners to sign Nice striker Mario Balotelli at the end of the season. The Italy international has been in fine form for the Ligue 1 outfit over the past 18 months, contributing 39 goals across all competitions.

West Ham are unlikely candidates to sign former Man City and Liverpool striker Mario Balotelli in June. When the transfer window reopens, and if West Ham can retain their Premier League status, the Hammers are expected to be one of the country's top spending sides.

Mario Balotelli to return to the Premier League?

Remember seeing Mario Balotelli in the Premier League? Who could forget? Under the management of Roberto Mancini, the Mario Balotelli show rolled into Manchester in 2010, which often shadowed the signs of his huge potential. Although things didn't quite work out for the Italian during his time with Liverpool, he has now found a way of turning that potential into a strong goalscoring record and he could make a Premier League return next season, for free.

Nice president Jean-Pierre Rivere has indicated that Mario Balotelli could sign a new contract with the Ligue 1 club.