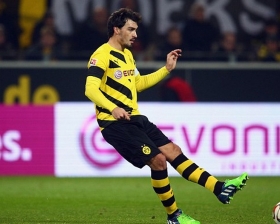 Manchester United are said to have failed with an approach to sign Mats Hummels prior to him re-joining Borussia Dortmund from Bayern Munich.

Manchester United have reportedly enquired with Bayern Munich over the possibility of signing centre-back Niklas Sule during the summer.

Chelsea have reportedly been told to pay up a fee of around £30m by Bayern Munich, if they are to secure the signature of Mats Hummels during the winter transfer window.

Chelsea and Tottenham Hotspur are understood to have held discussions with the representative of Mats Hummels with the defender said to be considering his future at Bayern Munich.

Manchester United could reportedly make an approach to sign Mats Hummels from Bayern Munich when the transfer window reopens at the turn of the year.

Freiburg defender Caglar Soyuncu has confirmed that Arsenal have expressed an interest in securing his signature this summer.

Former Manchester United manager Louis van Gaal has revealed that the Red Devils had expressed an interest in signing both Thomas Muller and Mats Hummels during his time at Old Trafford.

Manchester United have reportedly added Borussia Dortmund's Christian Pulisic to their shortlist of targets. The United States international is being eyed for a summer transfer as the club look to close the gap on rivals Manchester City.

German giants Borussia Dortmund are hoping to recruit Ajax's Peter Bosz as their new manager after Thomas Tuchel was sacked earlier in the week.

Borussia Dortmund's Hans-Joachim Watzke has insisted Pierre-Emerick Aubameyang will not be leaving for Bayern Munich in the next transfer window.

Nothing seems to be going well for Arsenal at the moment, and things are not about to get any easier. The Gunners face Bayern Munich tonight at the Emirates, looking to overturn a 5-1 first leg deficit.

Mourinho admits he can no longer prise away players from rivals

Manchester United boss Jose Mourinho has insisted that his side are no longer in a position to lure top talents from the likes of Arsenal, Chelsea and Tottenham Hotspur.

Round up of Europe's top five leagues

All of Europe’s major leagues are now well underway and sports betting sites have shifted the odds on who will win them in reaction to results so far. Some pre-season favourites have been knocked down a peg or two after some poor results, while others have seen their odds shorten after a stellar start to the new campaign. Here we round up each of Europe’s top five leagues and who is in the race to win them.

Arsenal made a massive bid in excess of £50 million for Borussia Dortmund striker Pierre Emerick Aubameyang, according to reports in Spain.

Manchester City are reportedly in advanced negotiations with Borussia Dortmund to sign Gabonese striker Pierre-Emerick Aubameyang. The 27-year-old had a stellar season with BVB last term, netting 39 goals in all competitions.