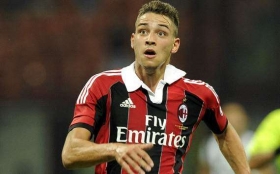 JUVE GOT A CHANCE Man Utd star Paul Pogba mulling over £6.8m-a-year contract offer by Juventus amid free transfer exit next month
30. Negotiations are ongoing with the star midfielder’s agent amid a busy transfer window for Juventus, who also tied Mattia de Sciglio up
02/06 19:53

Juventus will reportedly focus on landing the signature of Emerson from Chelsea before the transfer window concludes next month.

Juventus back in for Hector Bellerin

Serie A holders Juventus are planning a fresh attempt to sign Arsenal defender Hector Bellerin after missing out on his signature over the past two summer transfer windows.

Juventus are prepared to sell Colombian winger Juan Cuadrado this summer, should any club match their asking price of £26.8m. The 29-year-old has emerged as a transfer target for Arsenal, who are preparing for the exits of Carl Jenkinson and Mathieu Debuchy this summer.

The Italian right-back penned a five-year-deal with the Italian champions and leaves AC Milan after 15 years.

Serie A club Juventus are said to be lining up a bid for Manchester United defender Matteo Darmian, as Max Allegri looks to strengthen the defence of the Italian giants'.

Chelsea set to pounce on Serie A star amid contract standoff

Chelsea are reportedly keeping tabs on the situation of AC Milan full-back Mattia De Sciglio, who is considering a fresh challenge away from San Siro.

Chelsea are prepared to offload Cesc Fabregas to AC Milan in January, provided they are offered Mattia De Sciglio as part of a player-plus-cash deal.