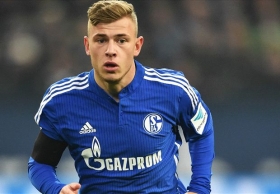 Max Meyer sends classy message to Crystal Palace fans after his January exit
the Eagles after signing a three-year deal when joining on a free transfer in August 2018. The German midfielder has found his opportunities
16/01 16:42

Reported Tottenham and Arsenal target Max Meyer has defended his decision to leave German side Schalke 04 on a free transfer this summer. The midfielder's contract at the club will expire and Meyer will head for pastures new at the conclusion of the deal.

Premier League duo Arsenal and Liverpool have been put on alert after Schalke 04 sporting director Christian Heidel confirmed that Max Meyer would be leaving the club this summer.

Arsenal are reportedly lining up a contract offer for Schalke's Max Meyer as they prepare to part ways with contract rebel Jack Wilshere in the summer.

Arsenal have identified a long-term replacement for the likely departing Jack Wilshere and Santi Cazorla. The Gunners are to make a transfer move for Schalke 04 midfield star Max Meyer in the summer transfer window.

Liverpool favourite Steven Gerrard has apparently confirmed that Emre Can will be leaving Anfield when his contract expires at the end of the season.

Arsenal identify Schalke midfielder as top target for the summer

Arsenal boss Arsene Wenger has reportedly set his sights on signing Schalke 04 midfielder Max Meyer, who is out-of-contract at the end of the season.

Philippe Coutinho handed in a transfer request to Liverpool bosses this week as he tries to force a move to Barcelona. The Anfield club rejected the request and maintain that the Brazilian is going nowhere. However, as Barcelona continue to chase the playmaker, Liverpool have identified a Serie A target to replace him.

Tottenham Hotspur and Leicester City have joined the pursuit for reported Liverpool target Max Meyer. The 20-year-old was on the Reds radar over the summer, but a deal failed to materialize.

Liverpool are prepared to continue their spending spree with a move for Schalke 04 midfielder Max Meyer. The 20-year-old has established himself as a regular at the Bundesliga outfit.