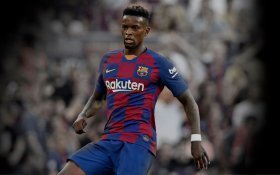 Barcelona are reportedly planning a fresh bid for Manchester United outcast Diogo Dalot amid the uncertainty over Nelson Semedo's future.

Chelsea to miss out on signing Juventus midfielder

Chelsea are set to miss out on the signing of Miralem Pjanic from Juventus with the midfielder determined to join Barcelona at the end of the season.

The representative of Chelsea midfielder Jorginho has hinted that his client could prefer a move to Juventus at the end of the season.

Chelsea have reportedly set an asking price of £60m for midfielder Jorginho, who has been linked with a possible move to Juventus.

Barcelona defender Nelson Semedo is reportedly said to favour a move to the Premier League with Manchester City during the summer transfer window.

Manchester City are reportedly leading the race to sign Nelson Semedo from Barcelona during this summer's transfer window.

Barcelona have reportedly entered the race to sign Diogo Dalot from Manchester United.

Barcelona to offer €70m plus players for Serie A striker?

Barcelona have reportedly offered €70m for Inter Milan striker Lautaro Martinez while also willing to include two players in the deal.

According to Sky Sports, Barcelona have identified RB Leipzig right-back, Lukas Klostermann, as the replacement for exit-linked Nelson Semedo.

According to Mundo Deportivo, Barcelona are open to selling Nelson Semedo and are willing to listen to offers for the Portuguese star.

Spanish giants Barcelona have reportedly decided against making a move for Hector Bellerin at the end of the season. The 22-year-old joined the Gunners from the La Masia academy during the summer of 2011.

Juventus back in for Hector Bellerin

Serie A holders Juventus are planning a fresh attempt to sign Arsenal defender Hector Bellerin after missing out on his signature over the past two summer transfer windows.

In a shocking turn of events, PSG's president Nasser Al-Khelaifi has shot down strong rumours linking Neymar with a move to the French side.

Barcelona manager Ernesto Valverde is already preparing for life after Neymar at the Camp Nou and is readying a bid for Atletico Madrid's star man Antoine Griezmann.

Paris Saint-Germain are prepared to offer Argentine winger Angel di Maria in a proposed deal for Barcelona's Neymar this summer.

Neymar's move to PSG looked to have taken a step closer after he walked out of Barcelona's training session following a bust up with new boy Nelson Semedo and also cancelled an event with Chinese travel agent firm Ctrip, citing "transfer business".

The arrival of Dani Alves has all but confirmed that Serge Aurier will leave the club and Manchester United are believed to be front-runners as Mourinho wants a successor to Antonio Valencia.

Spanish giants Barcelona have confirmed a transfer agreement to sign Benfica defender Nelson Semedo this summer. The Portugal will undergo his formalities on Friday before sealing a five-year deal with the Catalan outfit.

Manchester United boss Jose Mourinho has stalled on the club's pursuit of Nelson Semedo due to a disagreement over the transfer price.