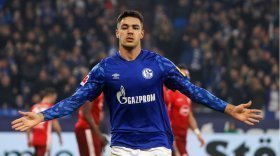 Crystal Palace close in on £20m deal for Lyon defender Joachim Andersen after his impressive loan spell at Fulham last season... and Eagles also remain in talks over a move for Schalke's Ozan Kabak
Guehi from Chelsea, while they have also brought in midfielders Michael Olise and Jacob Montes as well as goalkeeper Remi Matthews. Chelsea
24/07 18:41

Liverpool are prepared to part ways with defender Nathaniel Phillips for the right price this summer, The Sun reports.

Liverpool are reportedly exploring the option of a permanent deal for Schalke 04 defender Ozan Kabak.

Liverpool are reportedly ahead of Manchester United in the race to sign Napoli defender Kalidou Koulibaly this summer.

Liverpool have suffered a fresh injury blow with midfielder Jordan Henderson set to be sidelined for around six weeks.

Liverpool will make an attempt to sign Ben White from Brighton & Hove Albion during this summer's transfer window.

Schalke 04 are reportedly 'desperate' to sell Ozan Kabak to Liverpool during this summer's transfer window.

Marseille defender Duje Caleta-Car has confirmed that Liverpool made a move to sign him during the winter transfer window.

Liverpool have identified Torino defender Bremer as one of their top targets for the summer transfer window.

Liverpool have received a big boost ahead of the Premier League clash against Manchester City on Sunday.

Liverpool are set to sign Ben Davies and Ozan Kabak before the 11pm transfer deadline tonight.

Arsenal have agreed to terminate the contract of German defender Shkodran Mustafi.

Liverpool have no plans of pursuing a new central defender in January despite the long-term injury for Virgil van Dijk.

Liverpool have reportedly opened negotiations with Schalke 04 over a potential January deal for Ozan Kabak.