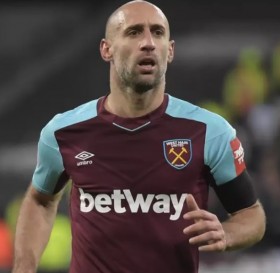 Pablo Zabaleta claims Man City reaction to Champions League exit shows clear progress
the Blues know they can make up for it somewhat by winning the Premier League this weekend. And after the Madrid disappointment, Zabaleta
18/05 18:30

West Ham United could reportedly pounce on the signature of Manchester United right-back Antonio Valencia when the current season comes to a close.

West Ham defender Pablo Zabaleta has revealed that he hopes to end his career in Serie A. The Argentinian full-back, who has played for Man City prior to moving to the Hammers, has 8 months remaining on his current deal with the Premier League side.

West Ham United are closing in on the signing of highly rated Sporting Lisbon midfielder William Carvalho for a reported fee of £30 million. Carvalho will bring European Championship winning experience to the London club thanks to his appearances for Portugal at Euro 2016.

Guardiola has built for the future

Manchester City manager Pep Guardiola has justified his club's big spending during this summer transfer window and says that the additions he has made will mean that minimal additions will be required in the coming years.

Fernando becomes the latest player to leave Manchester City as the Brazilian joins Turkish giants Galatasaray for a fee of €5.25 million.

West Ham United will turn down any approach from Liverpool for Argentinian attacking midfielder Manuel Lanzini. The 24-year-old is highly regarded at The London Stadium and he is set to feature strongly for The Hammers in the upcoming campaign.

Javier Hernandez will want to redeem himself on EPL return

West Ham United goalkeeper Joe Hart has backed Javier Hernandez to prove his credentials on his return to the Premier League. The Mexico international spent five seasons at Manchester United, where he managed 59 goals in 157 outings.

Antalyaspor president Ali Safak Ozturk went on record to confirm the club's interest in Jack Wilshere and that they are in talks to sign the England international.

West Ham United have carried on their summer spending spree after completing the signing of Marko Arnautovic from Stoke City on a five-year deal.

The Hammers look set to continue their summer spending spree after Stoke City accepted a £25 million bid for winger Marko Arnautovic, with the Austrian set to undergo a medical over the weekend.

Manchester City are set to lose another full-back after manager Pep Guardiola confirmed that Serbian defender Aleksandar Kolarov will join Roma next season.

Manchester City will lodge a fresh attempt to sign Monaco left-back Benjamin Mendy after their £44.5m bid was turned down earlier in the week.

Javier Hernandez's move to West Ham took a huge step forward after the Hammers' bid for the Mexican was reportedly accepted by Bayer Leverkusen.

West Ham United believe that they have the advantage over Chelsea in the pursuit of Bayer Leverkusen striker Javier Hernandez.

Manchester City have secured the signing of defender Kyle Walker from Tottenham Hotspur after they agreed on a club-record £53m deal for his services. The 27-year-old has signed a five-year deal with the Mancunian giants where he will wear the number two shirt.