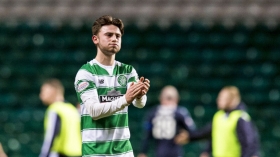 Manchester City have agreed a loan deal for star youngster Patrick Roberts and the player will head to Spain on a season long loan deal, joining La Liga minnows Girona. Roberts had spent last season on loan at Scottish champions Celtic and impressed during his stay north of the border.

20-year-old winger Patrick Roberts has returned to Celtic on a 12-month loan deal. Manchester City have allowed Roberts to return to the Scottish Premier League on a temporary basis and expect the player to return to the Etihad Stadium next summer.

Celtic manager Brendan Rodgers has revealed that he is open to re-signing Patrick Roberts on another loan stint, although the final decision would be left to Manchester City.

Celtic propose to take Patrick Roberts on another loan stint

Scottish champions are reportedly willing to pay a loan fee of around £500,000 in order to secure the services of Manchester City's Patrick Roberts for another season.

"He is the right appointment for this size of club and what we face in terms of not only the Scottish league but Europe and the Champions League."  These are the words of Ian Bankier, Celtic chairman, following the appointment of Brendan Rodgers to the Parkhead hotseat yesterday afternoon.

Manchester City are sure of sealing a deal for Fulham youngster Patrick Roberts by next week.

Manchester United are ready to make a summer offer for one of Fulham's top prospects, according to a report.

Liverpool to snap up Fulham youngster

Liverpool will make their move for highly-rated Fulham forward Patrick Roberts in January, according to The Mirror.

Liverpool scouts have been monitoring the progress of Fulham right winger Patrick Roberts. The youngster has been linked with a transfer to Anfield that will see him return to the Championship side on loan until the end of the 2014/15 season.

Arsenal have reportedy joined the likes of Manchester United, Real Madrid and Barcelona in the race to secure the services of Patrick Roberts from Fulham in the summer.

Fulham youngster Patrick Roberts is apparently being tracked by the likes of Barcelona and Real Madrid, according to a report.