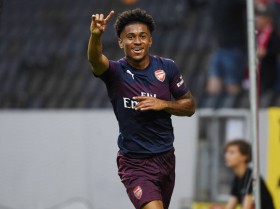 Mikel Arteta speaks out on Lucas Torreira and Reiss Nelson after Arsenal’s Carabao Cup win
loan and is expected to leave Arsenal before the window closes on October 5. Torreira has trained with his Arsenal ...
24/09 09:44

Both Liverpool and Arsenal have made perfect starts to their 2020/21 Premier League campaigns. Jurgen Klopp’s team beat Leeds United and Chelsea, while Mikel Arteta’s side won against Fulham and West Ham. All of which sets things up for a fascinating clash between the two ‘big six’ teams on Monday night.

Arsenal yet to open contract talks with emerging star

Arsenal have yet to finalise a new contract with club graduate Bukayo Saka, a report from Football.London claims.

Arsenal are scheduled to face Portsmouth on the road in tonight's FA Cup fifth round tie.

Arsenal have received a double fitness boost on the defensive front ahead of the forthcoming Premier League clash against Newcastle United at the Emirates Stadium.

Arsenal manager Mikel Arteta has said that winter signing Pablo Mari won't be rushed to first-team action despite the fact that he is close to achieving match fitness.

Arsenal have received a triple injury boost ahead of next weekend's Premier League clash against Newcastle United at the Emirates Stadium.

Arsenal have received a big fitness boost for the FA Cup fourth round tie against Bournemouth with Sokratis returning to first-team training following his illness.

Arsenal will make the trip to the Vitality Stadium to face Bournemouth in the Boxing Day Premier League clash. The Gunners have picked up just one victory in the past 10 league games but new boss Mikel Arteta will be aiming for a strong start on his managerial debut.

Arsenal make the trip to Old Trafford for Monday's Premier League clash against Manchester United. The Gunners are winless in the past 12 league meetings at Old Trafford and they have an opportunity to break the unwanted streak against a United side, who are struggling with injuries to key players.

Arsenal can secure a third straight victory across all competitions when they entertain Nottingham Forest in the third round of the League Cup tonight.

Arsenal have confirmed that Alexandre Lacazette needs an additional rest from first-team action in order to completely recover from the ankle problem sustained in pre-season.

Henrikh Mkhitaryan speaks on his future after Arsenal loan exit

Armenia international Henrikh Mkhitaryan has acknowledged that he is unsure regarding his future with Arsenal following his season-long loan spell at AS Roma.

Arsenal legend Nigel Winterburn has urged the Gunners to part ways with Henrikh Mkhitaryan, who has struggled to find the consistency with his performances.

Arsenal manager Unai Emery has expressed his delight after the club were able to secure a win over Newcastle United in the opening game of the Premier League campaign.

Tammy Abraham could be afforded a permanent departure from Chelsea in the summer with RB Leipzig interested in luring him to the Bundesliga.

Chelsea youngster Callum Hudson-Odoi has reportedly emerged as a potential transfer option for Bayern Munich ahead of the winter transfer window.

Arsenal youngster Reiss Nelson has said that he is 'very happy' at Hoffenheim but he remains unsure where he could ply his trade beyond the current campaign.

Hoffenheim's on loan attacker Reiss Nelson has discussed the possibility of making a permanent move away from Arsenal for the Bundesliga side once his loan spell ends. The English youngster has been in insatiable form for his club since making a move to Germany at the end of the summer transfer window.

Arsenal youngster Reiss Nelson has hinted that he could return to the Emirates early from his Hoffenheim loan spell.

Arsenal forward Reiss Nelson has signed a new long-term contract with the club before joining Hoffenheim on a season-long loan move.