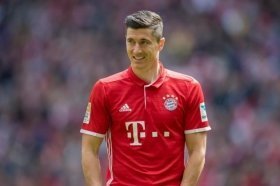 Liverpool star on his way to European giants

Barcelona could make a surprise attempt to sign Chelsea striker Romelu Lukaku with a deal for Robert Lewandowski uncertain.

Cristiano Ronaldo could push for a potential move away from Manchester United this summer, according to The Sun.

Manchester United could swoop for Robert Lewandowski if he decides to leave Bayern Munich this summer, Bild reports.