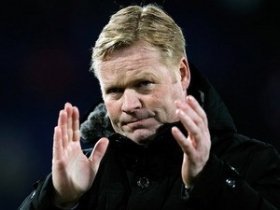 Ronald Koeman confirms interest in Liverpool star
attempt to sign Wijnaldum. A deal never materialised before the international transfer deadline, but Koeman has been quite open in stating
20/10 20:55

Manchester United reportedly reached an agreement with Barcelona to sign Ousmane Dembele on deadline day, only for the player to backtrack on the move.

Manchester United and Liverpool have received a boost in signing Barcelona winger Ousmane Dembele when the international transfer window reopens in January.

Barcelona to swoop for Liverpool midfielder in January

Barcelona will make their move to sign midfielder Georginio Wijnaldum from Liverpool when the transfer window reopens at the turn of the year.

Man Utd to miss out on Ousmane Dembele

Barcelona and France international attacker Ousmane Dembele will not be allowed to leave the La Liga side this summer, despite the ongoing interest of Manchester United. The Premier League side had initially been linked with a loan move for the wantaway player, but it now appears Dembele has decided to stay put at the Nou Camp and fight for his place in the club's first team.

Georginio Wijnaldum has reportedly turned down a new contract at Liverpool amid the transfer interest from Barcelona.

Manchester United have no plans of approaching Barcelona over a potential loan move for Ousmane Dembele.

Thiago Has The Barça DNA, But...

The reason why there is "but" in the headline is because even though Georginio Wijnaldum is the target that Barcelona's board of directors should aim to sign; simply to follow Ronald Koeman's requests, the board members at Barça who are willing to sign Thiago Alcántara are seven years late on their decision to give him a chance at Barcelona.

Liverpool have reportedly set an asking price for midfielder Georginio Wijnaldum amid the transfer interest from Barcelona.

Arsenal are regarded as the front-runners to sign Philippe Coutinho from Barcelona during the ongoing transfer window.

Manchester United are reportedly monitoring the developments of Ajax midfielder Donny van de Beek ahead of a potential move for his services.

Philippe Coutinho to stay with Barcelona?

Arsenal could potentially miss out on the signing of Philippe Coutinho from Barcelona this summer after the dismissal of Quique Setien.

Lyon striker Memphis Depay has refused to rule out a potential return to the Premier League amid the speculated interest from Tottenham Hotspur.

Barcelona are looking for Valverde's replacement

The Barcelona management are being pressurised by players and fans to get rid of Ernesto Valverde immediately.

Sadio Mane has become the latest injury concern for Liverpool after it was confirmed the forward has broken a bone in his hand.

On October 10th, we carried a report from Mundo Deportivo, who claimed that Ajax defender Matthijs de Ligt has emerged as a priority Barcelona target and Netherlands coach Ronald Koeman ‘recommended’ the Blaugrana to secure his services.