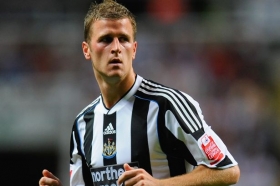 Newport's Ryan Taylor returns in time for Brighton cup clash
the substitutes when Michael Flynn hands in his teamsheet to face Premier League Brighton on Sunday evening. The forward has not featured
10/01 07:30

Former Newcastle United defender Ryan Taylor has sealed a move to Championship side Hull City for a Bosman fee.

David Silva out of Manchester Derby

Fulham manager Rene Meulensteen will make a bid for Newcastle United's wantaway centre back Ryan Taylor. The player is no longer needed at St James' Park.

Fulham are considering a transfer move for Newcastle United's out of favour defender Ryan Taylor. The centre back is frustrated that he is no longer an important part of Alan Pardew's first team.

Wigan have completed the signing of Charles N'Zogbia from Newcastle for a fee believed to be in the region of around £4.5 million. It is understood the Frenchman is delighted to have finally secured the move.

Charles N'Zogbia will complete his move to Wigan today while Ryan Taylor will be heading to Newcastle. Wigan chairman confirms the deal.

Manchester City has officially signed Shay Given from Newcastle United for a four and half year deal worth £6m.

Wigan boss: we're not safe yet

Steve Bruce was understandably delighted at scoring an impressive 2-0 victory over relegation rivals Birmingham City on Saturday, but revealed he still thinks the Blues are not yet guaranteed Premiership survival.

Two of the Premiership's relegation battlers go head to head on Saturday; both desperate for points. Wigan will hope this tie proves as easy as initially considered before the match.

Curtis Davies scored his first goal for Aston Villa as the Villains battled to earn a 2-1 victory over Wigan at the JJB. Gabriel Agbonlahor wrapped up the three points with the winner late on.

Wigan finally got their first win in 14 games thanks to a hattrick from Marcus Bent as they crushed Blackburn 5-3. Tempers did flare however, as Brett Emerton was later sent off on the hour.