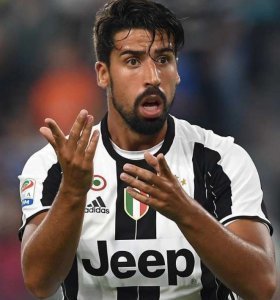 Can anyone stop Bayern? Breaking down every Bundesliga team for 2021-22
(Monza) Key Departures: MF Sami Khedira (retired), MF Matteo Guendouzi (Arsenal, end of loan) Expectations/History: Seen by many as a "big
12/08 09:00

Juventus midfielder Sami Khedira has opened the door for a potential move to the Premier League during the January transfer window.

Everton are reportedly making significant progress towards landing the signature of Sami Khedira.

Everton are reportedly ahead of West Ham United in the pursuit of experienced Juventus midfielder Sami Khedira.

Chelsea look to be in pole-position to land German ace Timo Werner following the RB Leipzig frontman’s admission that playing in the Premier League does appeal to him.

Serie A giants Juventus are set to decline any approach from Arsenal for the services of Adrien Rabiot during the winter transfer window.

Arsenal are reportedly plotting an ambitious loan move for Juventus midfielder Adrien Rabiot when the transfer window reopens at the turn of the year.

Juventus midfielder Sami Khedira is understood to favour a move to the Premier League this summer with both Arsenal and Wolverhampton Wanderers linked with his services.

Arsenal are reportedly looking to land the services of defender Daniele Rugani and midfielder Sami Khedira from Juventus before the transfer window closes.

Wolves are chasing Juventus' midfielder Sami Khedira on a reported 15 million euro transfer move. The German international, who won the World Cup in Brazil in 2012, is reportedly ready to move to England in search of regular first-team football.

Arsenal have reportedly offered Aaron Ramsey to Juventus this month with the hope of signing Moroccan defender Medhi Benatia in a straight-swap deal.

Arsenal boss fighting to keep midfielder at the club

Arsenal manager Unai Emery has reportedly not given up on the prospect of keeping Aaron Ramsey despite the midfielder's recent contract breakdown with the club.

Serie A holders Juventus have reportedly proposed to offer Sami Khedira in a straight-swap deal to sign midfielder Aaron Ramsey from Arsenal this month.

Italian giants Juventus are reportedly making efforts to pursue the services of Arsenal midfielder Aaron Ramsey, whose contract expires at the end of the season.

Germany international Sami Khedira has hinted that he could fancy a fresh challenge in the Premier League in the future. The World Cup winner has previously been associated with the likes of Arsenal, Manchester United and Chelsea.

Juventus begin talks with Emre Can

Serie A holders Juventus have reportedly begun contract talks with Liverpool midfielder Emre Can. The Germany international is free to speak to foreign clubs with his existing Reds deal due to expire in the summer.

Serie A giants plan lucrative offer for Emre Can

Serie A giants Juventus are prepared to discuss a pre-contract agreement with Liverpool's Emre Can when the transfer window reopens in the New Year.