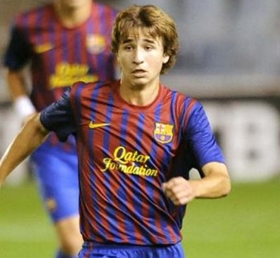 3 Barcelona Players who could be leaving in January

Barcelona still have a bloated squad in certain areas so more outgoings are likely in the January transfer window.

Spanish midfielder Sergi Samper will finalise a move from Barcelona to Las Palmas today. The highly rated player will put pen to paper on a one-year loan contract with the Gran Canaria side, with the option to extend to a permanent deal.

Spanish champions Barcelona have reportedly finalized a £25m deal with Valencia for the signature of Joao Cancelo. The Portugal international will link up with the club at the end of the season.

Stoke City defender Glen Johnson has been linked with a surprise switch to Barcelona in the January transfer window. The Catalan giants are on the search for a new right-back with Aleix Vidal set to leave Camp Nou.

Sunderland to rival Serie A trio for Aleix Vidal

Sunderland are weighing up a surprise move for Barcelona full-back Aleix Vidal, according to reports in Spain. The 27-year-old has fallen down the pecking order at Camp Nou, and is set to demand a transfer in the New Year.

Barcelona will return for Hector Bellerin

Barcelona have identified Arsenal full-back Hector Bellerin as a potential winter target. The Catalan giants failed with an enquiry for their former graduate in the summer transfer window.

Manchester United are reported to have kept a close eye on Barcelona youngster Sergi Samper.

Arsenal are reportedly favourites to land the services of young prodigy Sergi Samper.

Arsenal to swoop for Sergi Samper?

Arsenal are ready to trigger the release of highly-rated Barcelona midfielder Sergi Samper.

Tottenham Hotspur are reportedly interested in signing up Barcelona youngster Sergi Samper on loan in the January transfer window.

Adama Traore is yet another starlet to have emerged from Barcelona. In recent seasons, the likes of Munir and Sergi Samper have come through the ranks, hot on the heels of the likes of Marc Bartra and in years prior to that, Lionel Messi. Adama Traore looks to be yet another excellent prospect fresh out of the Camp Nou.

Arsenal are reportedly readying a January move for Barcelona youngster Sergi Samper, according to The Metro.