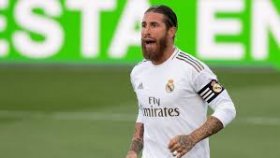 Sergio Ramos has 'said goodbye' to Real Madrid after rejecting Florentino Perez offer
fifth Champions League after Real advanced past Liverpool to make the semi-finals, where they will face Chelsea . Ramos played no part
15/04 11:00

Manchester United will make an attempt to sign Raphael Varane, should he decide to leave Real Madrid this summer.

Manchester United have not held any negotiations with Real Madrid defender Sergio Ramos regarding a summer move, as per Fabrizio Romano.

Real Madrid could go head-to-head with Manchester United in the race to sign Jules Kounde during the next transfer window.

Manchester United have not made contact with Real Madrid defender Sergio Ramos regarding a summer move.

Real Madrid captain Sergio Ramos is keen on joining Manchester United when his contract expires at the end of the season.

Manchester United and Arsenal are among the clubs looking to lure Sergio Ramos on a free transfer at the end of the season.

Real Madrid have reportedly earmarked Romelu Lukaku as a potential candidate to replace Karim Benzema in the long run.

Manchester City have reportedly joined the likes of Paris Saint-Germain and Juventus in the pursuit of Real Madrid captain Sergio Ramos.

Liverpool are reportedly planning a mid-season move for Eder Militao as they look to solve their central defensive crisis.

RB Leipzig defender Dayot Upamecano is reportedly prepared to turn down the likes of Arsenal and Tottenham Hotspur in order to join Real Madrid this summer.

Real Madrid boss Zinedine Zidane is reportedly determined to land the signature of Dayot Upamecano from RB Leipzig during the summer.

Real Madrid captain Sergio Ramos has said that the door is open for midfielder Paul Pogba to make the move to the Bernabeu.

Man Utd midfielder Paul Pogba has been linked with a transfer away from Old Trafford for several months, but so far the French international has stayed put. It is understood that Real Madrid are weighing up a new offer for Pogba in the January transfer window.

Real Madrid defender Sergio Ramos has informed his club that he would like to leave Spain for a move to China, and has instructed his agent to do everything within his power to help secure a move abroad. Ramos had been hoping that after more than a decade of loyalty to Real, he could guarantee a free transfer move away from the club.

Liverpool centre-back Virgil van Dijk has emerged as a potential transfer target for Real Madrid, should Sergio Ramos leave the Bernabeu during the summer transfer window.

In less than 48 hours of Zinadine Zidane’s sensational appointment as a Real Madrid coach, reports have been doing grounds about the €300 million transfer kitty being handed by Florentino Perez to Zidane. Zidane has some of the best footballers on his wish list. Ranging from Neymar to Eden Hazard, the wish list is star studded.