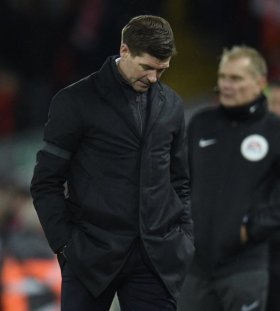 Michael Beale reveals Steven Gerrard Rangers support as new boss makes 'can't compare' claim
... challenge. Despite this, Beale revealed he hasn't spoken to the Liverpool icon yet since taking the role on but knows he is supporting him.
01/12 18:51

Unai Emery has been appointed Aston Villa manager, and will take over the role left by Steven Gerrard, who was sacked last week. Unai Emery, formerly of Arsenal, PSG and Sevilla, helped lead Villarreal to the Europa League title, the fourth team he had coached to victory in the European showpiece.

After a dismal 3-0 defeat to Fulham and a lacklustre performance by the club's players, Aston Villa have sacked Steven Gerrard last night. The former England international has been under pressure and faced a barrage of abuse from the club's support during the game, and now finds himself out of work after a hugely disappointing spell at Villa Park.

Douglas Luiz has surprisingly turned his back on a potential move to Arsenal, instead deciding to put pen to paper on a new contract with Aston Villa. The Brazilian holding midfielder has long been linked with a transfer move to the Emirates Stadium, but has now opted to stay with Villa for another campaign.

Dendoncker arrived at Wolves from Anderlecht in 2019, and played over 100 times for the Molineux outfit in 3 years. Aston Villa have been chasing the Belgian for over two months and are delighted to have today finally sealed a transfer for the player.

Aston Villa have emerged as candidates to sign Espanyol forward Raul de Tomas, as the 27-year-old striker looks set to depart his club after just two seasons. Prior to Espanyol, Raul de Tomas was somewhat of a journeyman, having a spell playing for Benfica, Rayo Vallecano, Valladolid, Cordoba and Real Madrid, where he began his professional career.

Aston Villa defender Matty Cash has emerged as a shock transfer target for Spanish La Liga champions Atletico Madrid, with the full-back ready to move to Spain in a deal worth up to 40 million euros. The Poland international, who joined Villa from Nottingham Forest in 2020, is ready to move after just one full season with his club.