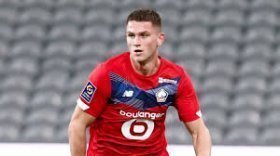 Dan Burn breaks down interview with Sean Longstaff to brilliantly re-enact the famous Paul Gascoigne one-liner after Newcastle sealed their place at Wembley in the Carabao Cup final
... partnership with Sven Botman has given the Magpies the best defense in the Premier League. talkSPORT BET OFFER OF THE DAY Get up to £40 in ...
01/02 18:16

Newcastle are expected to continue a busy transfer window with a move for Bayer Leverkusen winger Moussa Diaby and Leeds United attacker Jack Harrison. Newcastle are ready to spend as much as £100 million in pursuit of new signings this summer, with Sven Botman set to be announced this week.

Dutch defender Sven Botman will today complete a move from Lille to Newcastle United. The highly rated defender will move to the Toon Army in a transfer package said to be worth £31 million, signing a five year deal with Eddie Howe's side.

Newcastle United have their sights on landing Lille centre-back Sven Botman during the winter transfer window.

Chelsea are reportedly considering a new approach for Jules Kounde ahead of the January transfer window.

Chelsea manager Thomas Tuchel has confirmed that the club attempted to sign Jules Kounde from Sevilla this summer.

Liverpool have reportedly made contact with the representative of Lille defender Sven Botman regarding a possible January move.