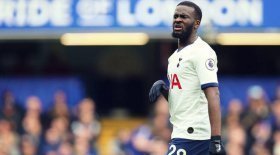 Tottenham Hotspur: Paul Robinson urges sale of Tanguy Ndombele
... to see the 25-year-old dramatically turning things around with the Premier League club. That certainly seems to be the view of Robinson, ...
30/11 21:40

Napoli transfer representatives met with Tottenham's management in North London yesterday, and a deal was agreed to allow Tanguy Ndombele to move to Serie A for the season on a loan deal. It was Spurs' preference to sell the midfielder in a permanent deal, but no club has been able to match Ndombele's reported £100,000 per week salary at White Hart Lane.

Tottenham have agreed a transfer to sign Rodrigo Bentacur from Juventus, with the Uruguayan midfielder set to agree a long-term contract. Spurs will pay 23 million euros plus 3 million extra in installments for the player.

Tottenham will allow Bryan Gil to leave the club for Valencia on loan until the end of the season, whilst Tanguy Ndombele looks set to rejoin former club Lyon. Both midfielders have fallen out of favour since Antonio Conte arrived at White Hart Lane.

Barcelona will make a loan proposal for Tottenham Hotspur midfielder Tanguy Ndombele at the turn of the year.