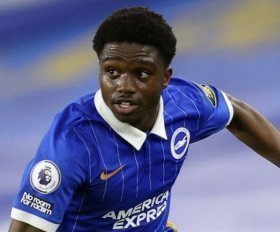 Otto Addo explains what Brighton's Tariq Lamptey gives Ghana with Uruguay World Cup test looming
The Manchester City example that shows what Brighton can do amid Chelsea transfer raids What Brighton have planned during the World Cup as ...
30/11 12:52

Arsenal have reportedly stalled their pursuit of Tariq Lamptey with the Brighton & Hove Albion defender set to undergo a surgery.

Arsenal defender has agreement to leave this summer

Arsenal defender Hector Bellerin reportedly has an agreement with manager Mikel Arteta to leave the club during the summer transfer window.

Arsenal have identified a couple of players, who could replace Hector Bellerin during the next transfer window.

Brighton and Hove Albion have agreed a new contract with talented full-back Tariq Lamptey. The right-sided defender had been monitored by both Arsenal and Bayern Munich, but the 20-year-old has instead opted to tie his long-term future to the South Coast side.

Arsenal have reportedly identified a suitable replacement for Hector Bellerin, should he make the switch to Barcelona.