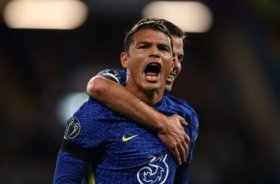 Chelsea defender Thiago Silva: Arsenal title push built in Brazil
... this season with Arsenal – it's a big reason why they're top of the Premier League . “Jesus, we've known about his quality for a long time, ...
01/12 15:32

The Oldest Players to Ever Grace the Premier League

The Premier League is one of the world’s best and most competitive leagues and over the last few years, with fitness, health and training regimes becoming more and more refined, we’re seeing players hit their peak later in life and play on for much longer.

Chelsea manager Graham Potter has provided team news ahead of the club's Premier League clash against Brentford on Wednesday.

Brazil and Chelsea defender Thiago Silva has talked up the chances of him signing a new contract with the Blues, saying that talks are well under way and that he plans to extend his playing career by at least another year.