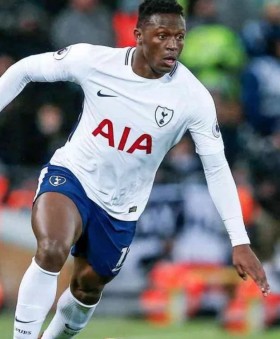 Celtic struck gold with Victor Wanyama sale
also travelled south of the border as he joined Bournemouth. More often than not, it’s been Southampton who have dialled the phone. Whether
06/09 20:05

Kenyan international midfielder Victor Wanyama secured a move to MLS side Montreal Impact last night, after being released by Tottenham Hotspur due to limited playing time. This follows on from speculation that the former English Premier League defensive midfielder has reportedly instructed his agent to find him a new club during January transfer window.

Kenyan international defensive midfielder Victor Wanyama could be on the cusp of a Tottenham departure, after the arrival of Tanguy Ndombele from Lyon. It is understood that Spurs will accept a fee of around £13 million for Victor Wanyama and that there are several suitors in the Premier League.

Tottenham Hotspur are aiming to beat Manchester United to the services of David Brooks in the summer by lodging a club-record bid of around £50m.

Tottenham Hotspur are reportedly weighing up an approach to sign Watford's Abdoulaye Doucoure during the forthcoming winter transfer window.

Kenyan international Victor Wanyama looks set to depart Tottenham in the January transfer window, with the likes of Serie A duo Sampdoria and Genoa both in the race to sign the defensive midfielder. Former Southampton and Celtic player Wanyama has two and a half years remaining on his Spurs contract.

Belgium international Mousa Dembele is among the leading contenders who could part ways with Tottenham Hotspur at the turn of the calendar year.

Tottenham Hotspur remain keen on Colombia international defensive midfielder Wilmar Barrios and have an agreement to sign him in January, according to Argentine journalist Luis Fregossi. The reporter claims that Spurs boss Mauricio Pochettino is a long-time admirer of the 25-year-old, who currently plays for Boca Juniors.

Liverpool are reportedly eyeing a surprise deal for Victor Wanyama, who has been earmarked as a potential replacement for Germany international Emre Can.

Tottenham Hotspur will meet Juventus for the first time in a competitive fixture when they travel to Turin for the Champions League round of 16 first-leg. Spurs come off a solid 1-0 win over Arsenal in the Premier League, but they are up against an outfit which have kept seven consecutive clean sheets across all competitions.

Tottenham Hotspur will look to avenge their derby defeat earlier in the campaign when they host Arsenal at the Wembley Stadium this afternoon.

Tottenham Hotspur will look to avenge their early season defeat to Arsenal when they host them at the Wembley Stadium tomorrow. Spurs have dominated the proceedings versus their north London rivals in their home patch, but they will still be wary of the Gunners' newly-formed attack partnership of Henrikh Mkhitaryan and Pierre-Emerick Aubameyang.

Tottenham Hotspur could lodge a move to sign midfielder Ross Barkley from Everton during the winter transfer window. The England international is also deemed a target for Premier League champions Chelsea.

Tottenham Hotspur are shock candidates to sign Arsenal's out-of-favour midfielder Jack Wilshere when the England international's contract expires at the end of the season. Wilshere, who spent last season on loan at Bournemouth, has been edging closer to regular first-team football with the Gunners this season.

Antonio Conte put in a tactical masterclass as Chelsea were able to come up 2-1 winners against Tottenham, who were clear favourites in the lead up to the game.

Tottenham Hotspur are set to offer £27 million to Barcelona for attacking midfielder Denis Suarez and hijack Serie A side Napoli's attempts to sign the 23-year-old. Suarez was signed from Manchester City's youth team in 2013 but has struggled to make the transition to Barcelona's first team.