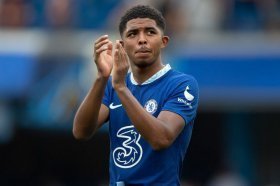 Chelsea set comeback date for defenders Reece James and Wesley Fofana
... Chelsea are stepping up their preparations ahead of the Premier League resumption (Picture: Getty) Chelsea are optimistic key defenders ...
06/12 08:03

Chelsea have been linked with a move for Atletico Madrid defender Jose Gimenez during the January transfer window.

Chelsea manager Graham Potter has confirmed that Kalidou Koulibaly will not be available against Red Bull Salzburg tomorrow.

Chelsea have confirmed that midfielder N'Golo Kante will be sidelined for four months after sustaining a hamstring injury.

Chelsea have suffered a fresh injury blow with Mason Mount considered as doubtful to face Aston Villa on Sunday.