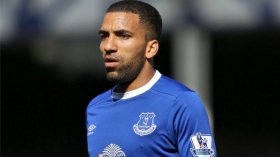 Burnley vs Norwich lineups confirmed as Ben Mee ruled out, Aaron Lennon in & Matej Vydra starts
Vydra is fit to start for Burnley against Norwich City in the crunch Premier League clash with Aaron Lennon starting in place of the injured
02/10 14:00

Aaron Lennon yesterday completed a transfer move from Everton to Burnley and in his goodbye message sent a thank you to the Toffees' fans. The former England international came back from the brink after suffering mental health issues.

Burnley have reportedly been given permission to discuss personal terms with Aaron Lennon after they agreed on a transfer package with Everton.

Chelsea has made nine changes to his lineup for tonight's League Cup clash against Everton.

Aaron Lennon on his way to Burnley?

Everton winger Aaron Lennon is wanted by Premier League rivals Burnley with the Clarets hopeful that a deal can be agreed before the transfer window slams shut this evening. Lennon has recently forced his way back into contention at the Toffees after an extended period out of the game.

Watford are reportedly eyeing a temporary deal for Everton winger Aaron Lennon this summer. The England international missed the final stages of last season with a stress-related illness, but he has since returned to participate in the pre-season schedule last month.

Tottenham Hotspur winger Aaron Lennon is eager to make a move to Everton before tomorrow's transfer deadline, according to reports.

West Ham United will look to seal a deal for Tottenham Hotspur winger Aaron Lennon, according to reports.

West Ham United will come up with a renewed bid for Kevin Mirallas, after their initial bid of £6m was knocked back by Everton.

Everton will look to secure the services of Tottenham Hotspur winger Aaron Lennon on a permanent basis this summer.

Tottenham to price Everton out of Lennon move

Tottenham have quoted Everton a massive transfer fee for on loan winger Aaron Lennon. The England international is currently on a loan deal at Goodison Park.

West Ham United defender Aaron Lennon has revealed that he would be happy to remain at the club in spite of interest from Chelsea in recent weeks.

Tottenham have made a renewed bid for Belgian international Kevin Mirallas. Spurs are confident the midfielder will move to White Hart Lane this summer.

Tottenham Hotspur have told Everton that they would have to shell out at least £6m to sign Aaron Lennon on a permanent basis at the end fo the season.