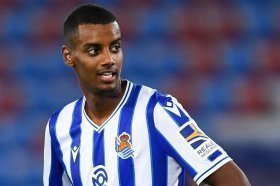 Arsenal are monitoring the situation of Real Sociedad striker Alexander Isak ahead of the January transfer window.

Arsenal manager Mikel Arteta has insisted that he has no plans of selling Alexandre Lacazette when the transfer window reopens.

Barcelona could offer stiff competition to Arsenal to sign Alexander Isak next summer, according to AS.

Arsenal are continuing to monitor the performances of Real Sociedad striker Alexander Isak.

Arsenal are prepared to trigger the release clause on Alexander Isak's contract if he is interested in joining them.

Chelsea won't entertain any offers for Timo Werner during the summer transfer window, The Sun reports.

Arsenal are prepared to hand a new contract to Eddie Nketiah, a report from football.london claims.

German giants Borussia Dortmund are hoping to recruit Ajax's Peter Bosz as their new manager after Thomas Tuchel was sacked earlier in the week.

Real Madrid could reportedly face defeat in the pursuit of AIK striker Alexander Isak. The Swede has snubbed Los Blancos' approach in a bid to complete a move to Borussia Dortmund.

Chelsea have deployed scouts to watch AIK Solna forward Alexander Isak, the Swedish youngster making waves in the Allsvenskan. The 17-year-old striker has impressed despite his age and numerous Premier League scouts have already been to visit the Stockholm based outfit to watch Isak in action.

Liverpool in for the 'next Ibrahimovic'

Liverpool have entered the race to sign the Swedish teenager labelled the new Zlatan Ibrahimovic, according to reports in Spain.