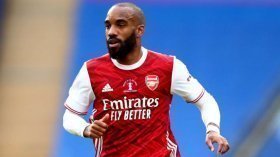 Manchester United have been fancied to make a January approach for Lyon striker Moussa Dembele, according to Media Foot.

Manchester United could make a January swoop for Lyon striker Moussa Dembele as they brace for Cristiano Ronaldo's exit.

27-year-old midfielder Corentin Tolisso has completed a move to Ligue 1 side Lyon this afternoon, having agreed a contract with his former club. Tolisso left Lyon for pastures new in 2017, joining Bayern Munich and appearing in only 72 games during his spell at the Bundesliga side.

Arsenal are monitoring the transfer situation of Denmark international Mohamed Daramy, with the Gunners looking to bolster their attack with at least three new signings this summer. Daramy, 20, currently plays for Dutch club Ajax having joined the Eredivisie side from FC Copenhagen in 2021.

The Daily Mail has reported that Arsenal are "very close" to securing a transfer deal for Man City and Brazil international striker Gabriel Jesus in a transfer package worth between 50-60 million euros. Alexandre Lacazette yesterday opted to transfer to his former club Lyon, leaving the Gunners short of attacking options.

Arsenal striker Alexandre Lacazette has reportedly agreed personal terms with Lyon ahead of his free transfer this summer,

Arsenal have been credited with a surprise interest in signing Atletico Madrid striker Alvaro Morata this summer.

Italy international Giacomo Raspadori is amongst the names linked with a move to Arsenal this summer. The Euro 2020 winning forward is ready to depart Sassuolo after spending 13 years with the club, and it is understood that the 22-year-old favours a move to the Premier League over Serie A, where both Juventus and AC Milan are interested in signing the striker.

Arsenal manager Mikel Arteta has said that the club have already decided on the contract status of three first-team players.

Arsenal could make improved offer for Serie A striker

Arsenal have been fancied to make an improved transfer offer for Napoli striker Victor Osimhen this summer.