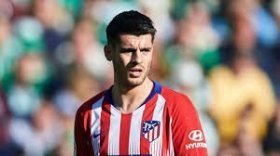 Transfer news LIVE! Alvaro Morata to Arsenal, Chelsea and Man United battle for Nkunku, Gabriel Jesus latest
new season despite interest from Chelsea and Manchester United. The Sun quote a report which states that the British transfer chief will
26/05 18:36

Arsenal have been credited with a surprise interest in signing Atletico Madrid striker Alvaro Morata this summer.

Spanish striker Alvaro Morata is likely to snub a move to Arsenal during this summer's transfer window, La Stampa reports.

Arsenal have been credited with an interest in signing Alvaro Morata this summer, according to Tuttomercatoweb.

Napoli have reportedly set an asking price of £14m for Arkadiusz Milik with his contract due to expire at the end of the season.

Manchester United could reportedly propose to sign Paulo Dybala from Juventus in a part-exchange deal for Paul Pogba.

Chelsea are reportedly planning to recoup funds from player sales in order to sign Jadon Sancho from Borussia Dortmund this summer.

Juventus are reportedly willing to offer Miralem Pjanic as a makeweight to sign Chelsea midfielder Jorginho this summer.

Atletico Madrid will have to pay a fee of around £48m to Chelsea for the services of Alvaro Morata when the transfer window reopens.

Edinson Cavani on his way to Atletico Madrid?

Atletico Madrid are reportedly prepared to make an approach to sign Olivier Giroud from Chelsea when the transfer window reopens next month.

Chelsea manager Frank Lampard has revealed that he is prepared to assess the position of Olivier Giroud when the transfer window reopens at the turn of the year.

French striker Olivier Giroud has acknowledged that he does not have the ideal situation at Chelsea after falling behind Tammy Abraham in the pecking order for the striker's role.

Spanish giants Atletico Madrid have confirmed that they have reached an agreement with Chelsea for the permanent signing of striker Alvaro Morata.

Atletico Madrid are reportedly prepared to secure a permanent transfer agreement for the services of Chelsea forward Alvaro Morata.