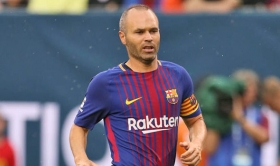 Barcelona had a loan bid rejected by Vissel Kobe for the return of the former star Andres Iniesta in the January transfer window.

Football Espana reports that Chilean star Arturo Vidal has suffered an injury on the right knee once again in his venture with the national side.

Manchester United have slapped a £97.95m price tag on midfielder Paul Pogba amid interest from Barcelona and Real Madrid, according to Don Balon.

Barcelona make another bid for Willian

Barcelona have made another bid of £55m for Chelsea winger Willian, according to Sky Sports.

Barcelona to offer player plus cash for Hazard?

Barcelona are looking to offer Ousmane Dembele plus cash to land Chelsea's Eden Hazard, according to reports in Spain.

Paul Pogba on his way to Barcelona?

Manchester United midfielder Paul Pogba has been linked with a surprise exit from Old Trafford with his agent Mino Raiola trying to push through a move to Barcelona.

FA Cup holders Chelsea are reported to have knocked back an opening bid from Barcelona for Willian.

Manchester City are ready to start contract talks with midfielder Ilkay Gundogan after the World Cup, The Sun reports.

Japanese side Vissel Kobe are to make a last ditch effort to sign Barcelona midfielder Andres Iniesta at the end of the season. The player's contract at the Camp Nou will expire and it is widely expected that Iniesta will make a move to Asia; however it is understood that his preferred destination is currently China.

Barcelona midfielder Philippe Coutinho has urged the club to pursue a move for Emre Can, who appears likely to leave Liverpool on a Bosman this summer.

Barcelona midfielder Andres Iniesta has backed Luis Enrique to be a success with Chelsea, should he be appointed as their next manager in the summer.

Barcelona midfielder Andres Iniesta has urged the club's hierarchy to revive their interest in Liverpool's Philippe Coutinho when the transfer window reopens in the New Year.

Owen Hargreaves has said that he "feels sorry" for Chelsea supporters after the Blues were drawn against Barcelona in the first knockout round of the Champions League.

Andres Iniesta has committed his future to Barcelona for the remainder of his career by signing a 'lifetime contract'.

Manchester City boss Pep Guardiola reckons Kevin de Bruyne is one of the best players he has worked with after his impressive start to the season.

The Spanish midfielder has expressed his unhappiness with how the club has treated him and has now hinted at a potential exit.