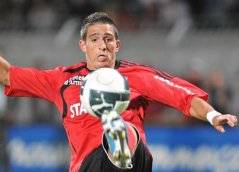 Fulham seal deal for Holland right-back; Scott Parker makes transfer vow
this transfer window. They include Anthony Knockaert and Harrison Reed who had been on loan at Craven Cottage last season. Former...
10/09 21:53

Initially appointed as caretaker manager of Fulham in March 2019, Scott Parker has secured Fulham a place back in England's top-tier at the first time of asking. He has remarkably done so in his maiden season as a senior manager, building a squad that has clearly bought into his simplistic, but far from primitive philosophy.

Tottenham Hotspur striker Harry Kane has said that it is good to be back to winning ways after his side's 2-1 win over Brighton and Hove Albion in the Premier League on Saturday.

Chelsea manager Antonio Conte has been forced to make changes to his starting lineup versus Brighton & Hove Albion this afternoon.

Manchester United will look to put more pressure on league leaders Manchester City when they take on Watford at Vicarage Road on Tuesday night.