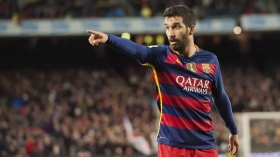 Liverpool playmaker Philippe Coutinho has allegedly picked his shirt number as he edges closer to his proposed move to Barcelona.

Barcelona are reportedly looking to convince Arsenal to sell Mesut Ozil in the New Year by offering Arda Turan in a player-plus-cash deal.

Barcelona are reportedly weighing up a move for Arsenal's Mesut Ozil who is regarded as a possible alternative to Liverpool playmaker Philippe Coutinho.

Liverpool have reportedly been left angered by Barcelona's renewed attempt to sign Philippe Coutinho in the New Year. The Catalan giants have offered Portuguese midfielder Andre Gomes as a makeweight to convince the Reds to do business.

Arda Turan to leave Barcelona on a free?

Barcelona are reportedly prepared to release Arda Turan from his contract, should they fail to find potential suitors for his services this month.

The Spanish midfielder has expressed his unhappiness with how the club has treated him and has now hinted at a potential exit.

Barcelona are on the verge of completing the signing of long-term target Jean Seri after they settled on a £36.5 million fee with Nice for the midfielder.

Following comments by Diego Costa in which he essentially begged Chelsea to allow him to move to Atletico Madrid, the London club have shot his request down and demanded the forward to report to training.

Manchester United are among the clubs interested in signing Barcelona midfielder Arda Turan this summer.

Barcelona forward Arda Turan is reportedly close to sealing a season-long loan move to former club Galatasaray. The Turkish footballer has failed to make an impact during his two years with the Catalan giants, scoring just five goals in 36 La Liga appearances.

PSG are set to frustrate Barcelona yet again, this time for the signature of Nice's combative midfielder Jean Seri.

Juventus general manager: Dybala 'won't be sold at any price

Juventus general manager Beppe Marotta has gone on record to say that Dybala will not be sold at any price this summer despite strong interest from Real Madrid and Barcelona.

Roma are hoping to beat Arsenal to the signing of Mahrez and have put a £30 million offer on the table for the Algerian to replace Mohamed Salah.

Arsenal are reportedly unopposed in their pursuit of Besiktas' Arda Turan after the Turkish club pulled out of the race for his services.

Everton have taken advantage of Arsenal's inability to tie up a deal and officially signed Henry Onyekuru from Belgian side KAS Eupen.

Arsenal set to lose out on Arda Turan

Arsene Wenger's failure to tie up a deal for Arda Turan looks set to come back and haunt him as Besiktas and Inter Milan are gaining ground on acquiring Turan's services.

With Atletico's transfer ban preventing them from buying anyone until January 2018, Diego Costa is prepared to wait for the winter transfer window to make his return to the club.

Arsenal have reportedly made a formal offer to sign unsettled Barcelona winger Arda Turan in the summer. The Turkish footballer has already agreed to personal terms with the north London club.

Arsenal are reportedly in the driving seat to sign Arda Turan, who is deemed surplus to requirements at Barcelona.