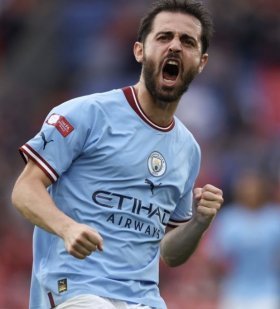 Jack Grealish backed to be ‘great’ for Man City as his teammate admits his start hasn’t ‘been easy’
... : Alamy Portugal star Bernardo Silva has praised England and Manchester City midfielder Jack Grealish ahead of their potential meeting in ...
07/12 16:02

Manchester City manager Pep Guardiola insists that the club have no plans to sell Portuguese versatile midfielder Bernardo Silva, amidst reported interest from Spanish La Liga giants Barcelona. Guardiola wants Bernardo as he sees the player to be an important member of his first team squad, and expects him to continue to pull the strings from midfield.

French youth international Adil Aouchiche is being considered by Premier League giants Man City in a surprise January transfer deadline day deal. Aouchiche is considered one of the brightest prospects in Ligue 1, having forced his way in to current club St-Etienne's squad despite being just 19-years-old.

Raheem Sterling on his way to Barcelona?

Manchester City attacker Raheem Sterling has been linked with a potential move to Barcelona during the January transfer window.

Leicester City have made it clear to Arsenal that they won't sell James Maddison unless their asking price is met.

Memphis Depay bid farewell to Manchester United and Premier League in 2017. The young Dutch winger couldn't make his mark at the Theatre of Dreams. He was eventually sold off to Olympique Lyon.