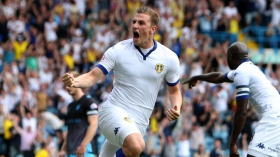 Newcastle United have made a formal bid of £33m to sign Chelsea striker Armando Broja this month, Tuttomercatoweb claims.

Championship regulars Leeds United are planning an approach to sign Liverpool striker Danny Ings in the New Year. The former Burnley man has struggled to make an impact at Anfield with multiple knee injuries hampering his progress.

Burnley have wrapped up the signing of Chris Wood from Leeds United for a club-record fee of around £15m. The New Zealand international arrives at Turf Moor following a top campaign with Leeds United last term.

Arsenal striker Chuba Akpom has emerged as a potential summer target for both Leeds United and Celtic. The England youth international made his Gunners debut back in the 2013-14 season, and has since appeared just four times in the top-flight

Leeds United striker Chris Wood is reportedly in Manchester for a series of medical tests ahead of his proposed switch to Burnley.

Burnley close in on £15 million striker

After seeing their initial £12 million bid rejected, Burnley are closing in on the signing of Leeds United and New Zealand striker Chris Wood, in a deal that would see the Championship earn £15 million.

Hot on the heels of Burnley's &pound12 million bid for Leeds United striker Chris Wood, West Bromwich Albion are the latest Premier League side to have expressed an interest in the New Zealand international striker. Wood is reportedly interested in a move to the Premier League before the transfer window closes on August 31st.

Championship side Leeds United have rejected an initial £15 million offer for New Zealand international striker Chris Wood. The prolific forward has scored 41 goals in 81 games since his arrival at Elland Road.