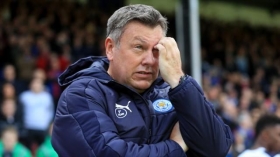 Exclusive: Pundit hails Craig Shakespeare’s impact at Aston Villa
. He went with Sam Allardyce to Everton, finished 8th after being at the bottom of the league, went to Leicester City, they got promoted and
03/10 07:05

Craig Shakespeare has been relieved from his managerial role at Leicester City just four months after penning a permanent deal with the club.

Arsenal and Tottenham Hotspur will reportedly retain their interest in Leicester City star Riyad Mahrez when the transfer window reopens in the New Year.

Former Manchester City and Arsenal defender Bacary Sagna is reportedly set to snub advances from Leicester City for a switch to the Serie A.

Nampalys Mendy, who had been originally signed by the Foxes to replace N'Golo Kante, has been allowed to leave Leicester City on a loan deal. Mendy has joined Nice on a temporary spell with a view to a permanent transfer in 2018.

Leicester City have informed Demerai Gray that he will not be allowed to leave the club today, despite having received two offers for the forward. The Daily Mail reports that Bournemouth have tabled a bid for the attacker.

Chelsea have reportedly reached an agreement to sign Leicester City midfielder Danny Drinkwater this summer. The England international has been linked with a potential move to Stamford Bridge in recent weeks, and it appears that the Blues have found a breakthrough in negotiations.

Leicester City are reportedly lining up a late bid for Manchester United defender Chris Smalling. The England international has been an unused substitute since the start of the Premier League season.

Leicester City manager Craig Shakespeare hopes to wrap up a deal for Crystal Palace winger Andros Townsend before the completion of the transfer window. Townsend is ready to leave Palace in favour of Leicester City as he looks to force his way back into England's international squad.

Watford manager Marco Silva is lining up a move for Leicester City's record signing, Islam Slimani. £30 million striker Slimani has worked for Silva before when the pair were both together at Sporting Lisbon.

The curtain will rise on the 2017/18 Premier League season on Friday night as Arsenal and Leicester City play the first fixture of what is one of the most highly anticipated campaigns for many years.

Leicester City are reportedly weighing up a move for Crystal Palace's Andros Townsend who is being seen as a potential replacement for Riyad Mahrez.

Manchester City striker Kelechi Iheanacho has finally completed his move to Leicester City in a deal that will see The Foxes pay £25 million. The Nigerian will now combine with Jamie Vardy in the Leicester attack, creating a partnership with great pace and deadly finishing.

Roma are reportedly close to finally signing Leicester City winger Riyad Mahrez after bumping up their offer to €38 million.

Iheanacho to be unveiled by Leicester this week

Kelechi Iheanacho will finally be unveiled as a Leicester player this week, despite a deal having been agreed for up to two weeks now. The Manchester City striker has fallen down the pecking order at The Etihad, but will be considered as a real coup for The Foxes with his natural goalscoring ability.

Having seen their bid for the Algerian winger rejected by Leicester City, Roma looks set to drop their interest in Mahrez and turn their attention to Manchester City midfielder Samir Nasri.